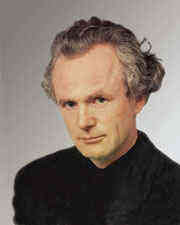 In actual fact, I want to tell you without misrepresentation, the whole story of Philhelm, which begins in Alsace (It was still a Germanic country and will become French only in 1678!) in the castle of Lichtenberg, on April 23rd 1616, when the seven-year-old Balthasar, loses the Monogram of his eponymy descendant. This ordinary but nevertheless very serious incident in the distant past will set in motion the artistic calling of one of his descendants, ten generations later!
This contemporary painter, born in Strasbourg in 1943, has exhibited his work (1999 and 2001) at the “International Biennial Event of Contemporary Art of Florence” which awarded him in 1999 the Prize of the City of Florence. So that the ordinary people be completely disorientated, so that it will let the story of the past enter him torpidly, by going back the furthermost possible or else it will never pierce the heart of his paintings, to seek there the secret causes of things.

PREAMBLE: A century ago, there were about 100,000 tigers in the world, since the species has melted 97%. 10 years ago, in 2003 there were still 7000. Currently, it would be only 3200 registered cats in their natural habitat! If we do nothing, the tiger has disappeared in less of 10 years! But you can still do, you can choose to join one or more of these associations all present on the Internet: WWF (World Wildlife Fund), Greenpeace, Planet Tiger, Save the Tiger, One Voice with Wildlife SOS Aquaverde, etc.

ART GALLERY / You may already know "The origin of the horse on earth," thanks to my previous painting P168 referenced on my website: www.philhelm.com in the "Art Gallery", here finally, "The origin of the Tiger" In the same spirit, since, as you now know, this table is read like a book that actually exists in the original format 9 cm X 12 cm / 3,54 x 4,72 inches and tells the true origin of the tiger on earth, even if you find somewhat extravagant! And for good reason, since its meaning is both worship and cultural, and has been for perhaps a thousand years, at least for certain, since hundreds of years. Its origin is Tibeto-Burman in a region that is now politically part of China's southwest. It should be noted immediately that the old writing is composed of drawings that only a few surviving Dongba priests are able to read! Many people immediately think of Egyptian hieroglyphics that we might be too quickly compared? But why not do it fast and simple? At first glance when looking for the first time this kind of paintings, one tends to see a children's cartoon? Especially since the treaty is extremely simple and violently colorful! Thence to imagine an ancient and sacred scripture reserved for priests for their many benefits both religious and shamanistic, but even more for those who want to learn more by reading the entire text that follows, it will seem strange if not confused ? But do not worry, I did not invent these myths about the origins have a sacred meaning it would be inappropriate to deny with last current Dongba priests. But back to our table: As you can see, it is surmounted by a pediment carved and polychromed! In fact, this pediment is the representation of the book cover! A central cartouche in red on gold informs us pictographic title of the book, as you already know since it is "The origin of the tiger!" From both sides of this as there are cuts offerings to the gods! Regarding the array itself, it is only the first page of the book, so the beginning of the story that comes out 12 pages, including the cover. As you can see, various signs accompany these drawings; they are all benchmarks for priests in the meaning of words and their pronunciation. One example to understand: Seven geese found in the four rows of the table and none is like, so it is not seven different words, but seven groups of words, which can also change direction, according drawing or a sign that precedes or follows it! It's a little more complicated than that, but enough to understand this amazing and beautiful writing! I confess that although bought in China, an English-dictionary Dongba I am only able to understand half of the signs and still not be sure of their position in the drawing itself! But here below from the drawings and signs alone, the complete translation of the original Tiger, led by a priest Dongba English. I assured the French translation respecting as far as possible, the original meaning, concludes with are not less beautiful than the drawings texts. What do you think?

“The origin of the tiger on earth from the Priests of Dongba, Naxi.”