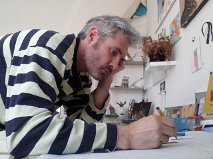 Jay Rechsteiner (°1971, Basel, Switzerland) is an artist who works in a variety of media. With a conceptual approach, Rechsteiner tries to approach a wide scale of subjects in a multi-layered way, likes to involve the viewer in a way that is sometimes physical and believes in the idea of function following form in a work.

With Rechsteiner's main interest in the underlying structure of things his artworks directly respond to the surrounding environment and uses everyday experiences from the artist as a starting point. Often these are framed instances that would go unnoticed in their original context. By demonstrating the omnipresent lingering of a ‘corporate world’, his works references post-colonial theory as well as the avant-garde or the post-modern and the left-wing democratic movement as a form of resistance against the logic of the capitalist market system.

His works demonstrate how life extends beyond its own subjective limits and often tells a story about the effects of global cultural interaction over the latter half of the twentieth century. It challenges the binaries we continually reconstruct between Self and Other, between our own ‘cannibal’ and ‘civilized’ selves. Jay Rechsteiner currently lives and works in London.

Rechsteiner was born in Basel, Switzerland in 1971, based both in London, UK and Basel, Switzerland. After his high school graduation & military service, he studied marketing planning & product management. He then emigrated to Fukuoka, Japan where he studied art at Atelier Studio Yoshida during which he was an active member of a new generation of artists in Fukuoka-City. After his last solo show at the Fukuoka Art Museum he returned to Switzerland where he stayed for two years while taking various courses in drawing, concept & methods at the School of Art & Design Basel. In 2004 Rechsteiner decided to move to London in order to peruse his artistic career. He soon established The Washroom Projects (TWP) which was an instant success in terms of press and artistic merit. He then developed TWP into the Washroom Talks which was presented twice at Tate Liverpool. In 2007 Rechsteiner joined forces with Portuguese Punk musician Victor 'Torpedo' from the Parkinsons and Tedio Boys and began working under the pseudonym Sardine & Tobleroni. Despite the vast artistic output of the duo Rechsteiner continues his solo work.

showville depicts an aerial view of a city. It is a commentary about the faked urban life we lead. Everything is for show, for sale, there are no true values left. http://jayrechsteiner.com/showville.htm

Pharmaville is an aerial view of a city that consists of pharmaceutical companies and buildings such as hospitals, drugs stores etc. It about the power of the pharmaceutical industry.