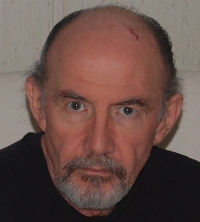 Raised and Educated in the City of Birmingham, Warwickshire.

Pen, pencil, crayons, and water paints taken in hand at the early age of five. Bugs, flowers and all things of nature were my muses, aided and abetted by my beloved Grandmother "Nanny Lisle" who also taught me to read prior to going to school.

Ran away to sea in the Merchant Navy (Commercial Shipping) after school leaving at age fifteen.

Emigrated to Canada in 1966, and have spent most of my life here in the Western Province of British Columbia. A couple of short forays back to England and other parts of Canada.

Brushes and paints became my best companion during my navy years and during the most part of my life whereever I lived it.

A brief encounter with Post Secondary education in the Fine Arts.

A lucrative employment in a creative line of work as a Costume Designer in the Motion Picture Industry.

A reminiscence of the Heat Dome we experienced in BC

A second image in the series "Heat Dome"