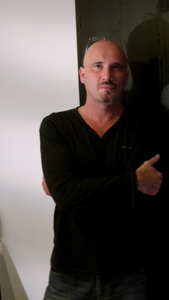 This French artist has a rich and unusual life. At the age of 20, he joins the French army as a “casque bleu” for the United Nation in Lebanon.
Being a witness and sometimes an actor in countries at war led him to be more aware of what is essential in life, that’s why as soon as he came back to France, he devoted himsef to find basic essentials which in his artistic process demands that nothing else but the work exists.
For Pascal Bejeannin, survival in hostile territories and his art are closely linked.
Each of his works finds its origin in what P.Bejeannin has lived out in the field whether with MSF(doctor whitout border) in the Amazonian forest or as an educator in Lapland where he has taken young delinquents to teach them how to go beyond their own limits in dangerous terrtories.

Through my artist process, I am trying to achieve two goals:
- The first one is to free myself from any financial contraint, whichs has led me to use reprocessing materials.
- The second one is my will to give a new life to old parts ordinarily put on the rubbish heap and to create works with heir own strength and life.
What the parts were made for at the origin is lost and transformed into something new and beautiful. Thus, from useless, multiple and sundry old spares without any more value, each sculpture is becoming a challenge.
Those old parts of broken cars are getting a new function: They are the medium through which the artistic process is expressed. Thus, what I propose is a second reading of these spares.
Each part is used in this integrity, all the different parts are put together like a jigsaw tryng to give life to the sculpture.