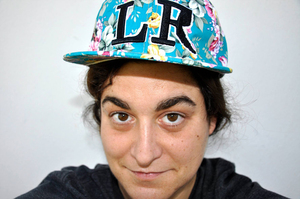 Luce Raggi is a woman as well as a contemporary artist and illustrator. Contemporary because she is alive.
To express her concepts Luce plays with life and irony as an interesting mental game, communicating through images to the audience.
"Laughing at nothing" is one of Luce's best quotes to describe this, believing irony is a feeling you can rely on in every situation in which you are living. In good or bad times, irony may be hidden but is always there. More than love. More than pain.

Luce was born in the early 80's in Faenza, near Bologna, and grow up with a black marker pen in her pocket. She moved to Milan where she studied Illustration at the European Institute of Design (IED) and Painting at the Academy of Fine Arts in Brera, partaking also in a one-year exchange program at the London College of Communication (LCC), University of the Arts, London.
Luce has since moved in her personal way into the circles of contemporary art with shows in galleries across Italy and also in London and growing her graphic experience making illustrations, designs, logos and creating her own clothing line.
Exploring her perspectives further through world-traveling, lately she has produced work in Iceland, Thailand and Mexico. Luce sees the world through surrealistic lenses. With her works she tries to give a different meaning of the actions around us, picturing a society made up of bizarre iconic characters, apocalyptic pasts and frightful actualities.
She usually works in a series of mediums - with an eclectic mix between drawing, sculpture, computer graphics and videoart. Bringing a stamp that is vivid and recognisable across them all.