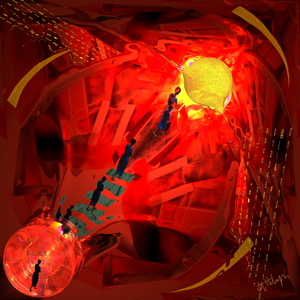 Photographer
After studies in Electronics, Jean-Luc Atteleyn begins professional photography in 1986, following training in photography in Arles at the National Photography School (NPS). A few years later, he embraces permanently industrial photography and quickly adds to his know-how the new technologies of digital treatment of images. He carries out
commissioned work for large industrial companies, such as : European Space Agency (ESA), Arianespace, Air Liquide, Daimler-Chrysler, Mercedes-Benz, for the best known. See the site : http://www.photographie-industries.com

Visual artist-photographer, his artistic approach
From 2000, he has developed an artistic approach based on an innovating founder concept: the artist involved in the personal space. This personal space can show both the activity of a company through its products, services and know-how, as well as the personality of an
individual. It is the renewal of a dialogue between the artist and the sponsor, between he who creates and he who enjoys the creation. Thus, creating, developing, promoting a special relationship with the sponsor enables the accomplishment of the uniqueness of the work created. The private sponsor also becomes the collector of a work designed and realized with him. You have understood: it is based on the "Make it together" approach. See the works : http://www.jean-luc-atteleyn.fr/

The only objective reality has never filled me. Thus, my inspiration has led me to seek a pre-existing situation to the first reality, vision hidden key. So I had to develop a process for me to get there, without being certain to be reached.
My artistic approach therefore aims to create links between the tangible world with its objective reality, mathematical - the world of industry in this case I know well - and a significant representation, poetic, can reach the greatest number. I created this representation from industrial reality, production, anywhere invested by the work of men ...
Thus, these two realities are less distant from each other as it seems. I leave you to create your own links between these two worlds, these two transverse realities.