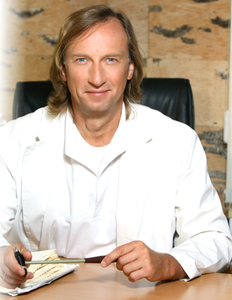 Yuri Kulikovich is a well-known person in Dnepropetrovsk, primarily as a doctor, but more recently he also became known as an active and innovative photographer. These two personalities organically intersect in his work, because the art is known to have a beneficial impact on human health. When you enter Doctor Kulikovich Clinic you can a lot of pictures on the walls, and everyone who ever got there had understood that his pictures could not be separated from his medical practice. Yuri Kulikovicha also has his own theory of color therapy based on the psychology of color perception, where, for example, green and blue (basic colors of nature) are symbols of harmony and purity; red and yellow stimulate activeness and self-confidence; purple helps to fill the soul with energy of inspiration, and orange helps to cope with negative experiences. But Doctor Kulikovich not only analyzes the color emotions he also researches their practical impact on patients. He examines where, how and in what civilizations the influence of color on the human body was used. He knows what colors help to heal special diseases. In Ukraine, there is also a tradition of chromatics. I remember how in the early twentieth century, the great Ukrainian artist Kazimir Malevich researched the color environment and its impact on human activity. Thus were born his squares - black, red, white. Thus were formed the recommendations of Malevich which were used in surgery, not white but gray-green clothing.

Yuri Kulikovich cannot imagine his life without artwork. He had a childhood dream - to become an artist, but had chosen a different profession. He became an artist when he had taken up a photography. The love of painting and sculpture found its expression in the fact that Yuri began to collect artworks. As early as the 1990s he began to composer his collection of paintings, posting a picture in his clinic. In those years, he performed himself as a philanthropist - has supported the city's first Biennale of Contemporary Ukrainian Art "Pan-Ukraine". Over the time, he met many artists in Dnepropetrovsk. He got interested in their artwork and their personalities. It is not an accident that he has composed a gallery of portraits of famous masters of the brush and chisel. Communication with art perfected photographer’s tastes, his vision of nature.

Kulikovich searches a manifestation of harmony and grace in artwork and in artists themselves. He himself, plunging into photo art gives up everyday routine immerses in a relaxed state when the brain is resting, negative associations disappear, the body is filled with positive emotions. What motives can bring this type of a perception of the world? First of all - landscape motifs, motifs of nature.

Photography is a way to communicate with nature and man for Yuri Kulikovich, most likely it’s a way to have a conversation. We can observe a reverse effect. The author’s state of mind allows him to choose the landscapes that are in tune with his emotions, the energy charged with photocomposition and a hundredfold reinforced is returned to the spectator. Thus, the therapeutic effect is being born. Kulikovich himself talks about some basic photo effect – he talks about the effect of harmony. The basis for the harmony is the color and composition. The combination of colors in the picture should be harmonious, whether it’s similar or contrasting colors, otherwise it will not resonate with the body. Certainly, the ability to see, select the desired point of view, a customized angle, the right format, the horizon line, as well as the original tonal processing photos, sometimes increasing the color of sound (the author in preparation for the printing works in filters), the use of photo paper "Metallic" and other nuances of the professional have created a unique style of the photographer Yuri Kulikovich. Moreover, we can talk about his photographs as photo-painting.

Indeed, the author’s works are akin to photographic pictures of the picturesque paintings, but painted not with the light and not with paints. After all, the main expressive means of photography is the light. It's not even that it is the light that creates an image on film, and that the compositions created by Kulikovich, imbued with light, they are examining the effect of the light, in this sense, they are in their own stained glass (either color or black and white work). And they are amazing in the state of admiration of the infinite beauty and perfection of our planet, they are monumental - the nature depicted is of their immense and incomprehensible character. Looking at the vast expanse - the watery element, or mountain ranges, heavenly or earthly firmament in the distance, - you keep thinking about the magic of the divine plan, the eternity and immutability of the cosmos, but at the same time, the fragility and the mobility of the environment. Occasionally come human figures or animals, traces of human activity are also seen - houses, boats, even towns,

as if seen from a bird's flight, but they are a part of this world, they are so small compared with the planetary forms.

We are talking about the first major series of photographs that Yu. Kulikovich called "the color therapy" and displayed at his first solo exhibition in Dnipropetrovsk’ historical museum in honor of D.I.Yavornitskogo in 2007. This series has been continued, and in 2010 it was exhibited at the Dnepropetrovsk Palace of students at the third solo exhibition entitled "The Color Therapy squared." (There are plans to expand the photographer’s collection and work on the very subject, and the geography of exposure). Visitors of the exhibition were impressed not only by exotic places, imprinted by the photographer (and he displayed the nature of not only of Ukraine, Russia and the closest of our neighbors - Turkey, Greece, Egypt as well as the nature of distant countries: Norway, Sri Lanka, Cambodia, etc). Mainly it’s the feeling joy and beauty, which the author himself has experienced in creating photographs. In this series, he usually uses the format of the square - for it is the ideal form. Often the images are made from height, for example, from a helicopter. The author involves the viewers and they feel as if they are flying high, he uses a panoramic view, sometimes with sharply receding perspective, with a high horizon line. The incoming waves, deep canyons, waterfalls, streams of clouds, snow-capped mountain peaks create an unforgettable impression.

The second major series of photographs by Yu.Kulikovicha - "The city and its people." It was shown at the second solo exhibition of the photographer in 2009 in Dnepropetrovsk Palace of students. This theme was being elaborated for several years, and now has a sequel. Its first theme is the city in the evening with illuminations: lit roads, buildings with lights, festive fireworks, lights lines where cars travel. The author invites you to walk through the night parks and gardens, fountains and lingers near the sculptured monuments - fantastic in its nightlife, and he admires the embankments and bridges, bright evening lights. In order to achieve the sense of holiday magic he makes use of special techniques, in particular, the long exposure.

Later on, the series includes photographs, , of everyday Dnepropetrovsk, some of them being black and white - sometimes ugly, sometimes presentable, business and more immersed in their care. The author looks into the faces of children, adolescents, and passers-by, working people - workers and doctors. He sees the front side of the city, looking at the backyard. Now a series of portraits of famous personalities is being completed, among them there are 25 portraits of the leading artists of Dnepropetrovsk. Some of them have already passed away. The images are truly heartfelt and real. The series has gained historical significance in the course of time because it is the time lapse of a city life. Although sometimes it seems that the closer the photographer is closer to the poetry of eternity and not to the realism of everyday life. It’s no wonder that he plans to work on the theme of "the color therapy" and display it during the next solo exhibition.

Given that Yu. Kulikovich has undertaken photography recently, namely he started in 2005, we are pleasantly surprised by the professionalism of the author, which not was mentioned on several occasions at the international photo exhibitions, in particular, during three photo contests in the city of Linz (Austria, 2007-2008.). This is the result of self-learning and honing his skills. Despite the fact that the creativity of Yu. Kulikovich flows in the direction of the contemporary art photography, he is able to crystallize his own style and to convey his personal outlook, to reveal its therapeutic effect on the human body which photo-painting exerts. He created hundreds of photo works of art that possess a big positive charge. It is not surprising that his shows are the subject of interest from a very serious viewer, for example, members of the church. In general, the photo exhibition by Yuri Kulikovich enjoyed great success among connoisseurs and wider audience. .