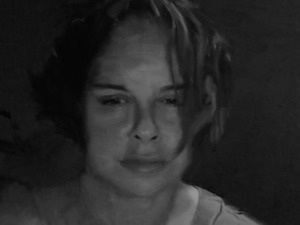 Anne Kingdon, for whom color is the chief symbol of expression, was born in Jackson, Mississippi. The daughter of a pastor, brought up in a religious and cultured atmosphere, Kingdon found painting an uncomfortable combination of salvation and deprivation. Between 1982 and 1987, when she finally decided to become an artist, Kingdon had many unsuitable and unhappy romances and worked unsuccessfully as a waitress, a phone solicitor, and a university administrator, where she was dismissed for overzealousness.

The works of her early period are somber-toned, sharply lit, genre paintings of which the most famous is "I am not myself." (1984). In 1989 she went to join her brother, a missionary, in Paris. Here, she began to lighten her dark palette and to paint in the short brushstrokes of the Impressionists. Her nervous temperament made her a difficult companion and night-long discussions combined with painting all day undermined her health. She began to alternate between fits of madness and lucidity and was sent to an asylum outside Paris for treatment.

It can be argued that her finest works were produced in less than three years. During this time her technique grew more impassioned in brushstroke, in symbolic and intense color, in surface tension, and in the movement and vibration of form and line. Her fusion of form and content is powerfully dramatic, while at the same time imaginative and emotional. Balancing delicately on the caprice of emotional instability, she remains absorbed in painting as an effort to strengthen her struggle against madness. Her paintings have been described as an emotional journey successfully explaining the spiritual essence of what it means to be human.

I try to make a painting every day, like a journal entry. I post them on Facebook for my friends and also on the blog, hellomonalisa.com The paintings have become a narrative to what's going on in my family, maybe our pets, my economically challenged neighborhood, and the general malfunction of my body and mind. Most of the recent paintings are done on my Ipad. Initially this was a foreign way to make images and I missed the smell and texture of real paint. But the great thing about the Ipad is you can paint in bed and not mess up the sheets. Also, you can paint in the dark.

“Death of a friend.”

“Everything good is right here.”

“It happened at the beach”

“The Palace of Everything Fine”

“Where are the horses now?”

“He could be running.”

“What the kids brought home.”

“The center of my domestic affections.”