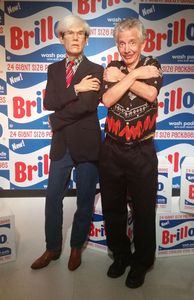 My art is not an exploration of new materials or techniques, or an elaboration of an existing style, like a word that needs another word for meaning. Meaning is elusive, especially with opposites that collide and continuously repel each other. This interaction can lead to balance or imbalance, harmony or conflict. It portrays a primal difference between nature and subject, disclosure and hiddenness, absence and presence.

My paintings express a present absence, a still life of trash from a wedding taking on a life of its own but destined to suffer the same fate, only to be saved by the presence of an artist, not in evidentiary photos, but in plant oils on cotton canvas, a tangible difference that doubts reality, much like our own consciousness. The clear becomes obscure and the obscure clear.

This doubt is given to the viewer, the freedom to roam the picture, to reach out and touch the physical surface. The style is intentionally traditional to contrast with modern media that exploit and deceive the privacy and immanence of human consciousness, and contemporary artists who are slaves to digital imagery.

There have been various interpretations of Van Gogh's painting Old Shoes. The most famous is German philosopher Martin Heidegger's essay "The Origin of the Work of Art." He interpreted the shoes as belonging to a peasant woman thus supporting his philosophy of Dasein. Meyer Schapiro criticized this essay by saying that Heidegger projected his own philosophy into the painting and missed one important aspect: "the artist's presence in the work." The shoes speak as "a portion of the self." This is very much in line with Van Gogh's letters, which reveal how he conceived and composed paintings. French philosopher Jacques Derrida defended Heidegger's interpretation, but to no avail. Reliability of equipment (shoes) could only be essential to the peasant woman, whereas Van Gogh's equipment was not the subject of the painting. He might have painted the shoes in bare feet for all we know. This painting reveals several levels of being: Van Gogh's shoes; Van Gogh's painting of his shoes; my painting of Van Gogh's shoes; my stepping into Van Gogh's shoes; my identification with Van Gogh's original intention.