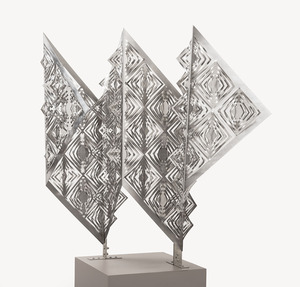 BIOGRAPHY
Sara G Jaramillo was born in Barquisimeto-Venezuela, daughter of Colombian Immigrants. She graduated in Dentistry from Central University Of Venezuela ( UCV) 1983.
She Began Studying in goldsmith in Artes del Fuego Academy AVAF, with recognized Venezuelan masters such as Julio Mota. Rosita Falena Cano.
In 2004 she supplemented her knowledge with studies of sculpture and Art in Blanca Lemoinne workshop.
She currently live in Bogota Colombia

OPTICAL SCULPTURE . SARA G JARAMILLO
Sara G. Jaramillo is an experimentalist sculptor who has found the ideal stainless steel to build their works material. This investigation goes back to his first forays into jewelry, fascinated by the manipulation of metals to transform through the heat. Such activity allowed her to penetrate the mysteries of the craft practices of cutting, polishing, burnishing and record the foil with the images suggested by the iconography of pre-Hispanic cultures. His admiration for these mythological animals of American Indian communities to derive an interest in geometry visible in their weaving, pottery and household items.
More recently, Sara G. Jaramillo explores the aesthetic possibilities of the square, the optical sensations through the system of lines and angles, its transformation and morphology, and their rotations, convex and concave. Beginning with diamonds developed square turns 45 degrees to achieve the feeling of pyramidal volumes and rhythmic twists on the way to convert his sculptures in three dimensional format, separated from the wall, also experimenting with temporary spaces of their shapes.
Eduardo Márceles Daconte
Writer and cultural researcher, former curator of the Queens Museum of Art in New York.
Curator: Museo Casa Grau