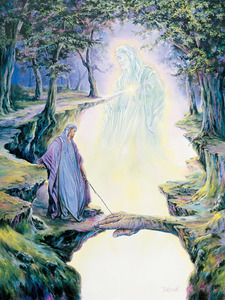 GABRIELL, A SYMBOLIC,VISIONARY ARTIST
Academician of the International Academyof Fine Arts of Quebec (2011)
Academician of the International Greco-Marino Academy of Italy (2015)
Gabriel Lavoie, born March 22nd 1956 in Temiscouata (Quebec, Canada), is a self-taught artist.
Always given to raise its art to more the high summit, Gabriell reinvents it continuously while inspiring the other artists to be made in the same way. Its multiple artistic experiments open the paths of the revival to him. Moreover, something of timeless emanates from its works.
With such a predestined name and a visionary, spiritual approach, the artist Gabriell is, without a doubt, a new reference in the world of symbolic painting. From one canvas to another, his works reflect his spiritual journey. For him, everything we paint expresses what we are.
Gabriell uses art (painting) to manifest and communicate the Light that is in him. He sincerely believes that art allows human beings to manifest the qualities of their soul.
Living modestly and humbly in Quebec, Gabriell grew up in the Lanaudière region. From his infancy, his drawing talents surprised everyone with their quality which seemed to come so naturally to him. Later, over the years, his love for drawing led to a reputation for excellence in portraiture. In spite of this recognition and success, he felt a great emptiness within and several personal changes set off deep questioning as to the meaning of his life.
During this period, not only did he call into question his need for success and acknowledgement, but also his talent. It became a watershed in his artistic career; a new path opened and new creativity emerged. It was the beginning of his life as an initiatic artist. Guided by greater confidence in his talent and a more present spirituality, he sketched landscapes inspired by the world of fairies, reflecting his new aspirations. This experience lasted a few months and proved to be very revealing. Then, oils and acrylics became his new choice of expression. The symbiosis between his personal soul-seeking and his painting gave rise to works of great depth, which allow him to express his immense potential.
With hindsight, thanks to symbolic analysis, he also understands how his employment as a school janitor helped to cleanse his ego and strengthen his spiritual will. Indeed, to be able to devote his days to developing his artistic talent while ensuring a necessary income on the material level, Gabriell worked as a school janitor for several years. His tasks involved cleaning various rooms, including the toilets and corridors, on all four floors of the school.
Regarding this stage in his development, he says, “Throughout all those years, I wasn’t aware of the impact this job would have on my future. In the beginning, my ego was really put to the test, especially as some of the teachers were old classmates of mine. I learned humility and detachment from people’s raised eyebrows and opinion of me. I integrated active meditation in my cleaning work as well as deep analysis and reflection. Every evening, I talked to God about my life and my future. This intense communication with Up Above forged my spiritual will. With all my heart and soul, I wanted to be able to express who I really was. That was my dream, my dearest wish. Then one day, an unexpected change turned up in my life. A new association gave me access to an artistic milieu and allowed me to leave my janitor job.”
This new partnership was short-lived but it served as a springboard to his future career as a teacher and professional artist. Gabriell considers this synchronicity as a wonderful gift from Heaven, the unhoped for, dream opportunity he’d been waiting for years. This new motivation engenders magical inspiration, never before experienced, which has a direct, exceptional impact on his life and art.
After eight years of apprenticeship and deep cleansing, Gabriell is now fully committed to his new program; as decided by Destiny. He now shares the gift he received from Heaven and his dream is coming true.
Today, Gabriell continues his path in his own workshop where, not only does he turn his talent and creative inspiration into magnificent paintings, but he also shares intuitive painting through enthusiastic teaching.
Every year, intuitive painting seminar-workshops are organized in Canada and Europe. Regarding his work, Gabriell says, “Intuitive painting has completely transformed my vision of Art and Life.” His works travel throughout the world and inspire the souls of new generations to discover inner beauty through art.
In 2011, Gabriell was awarded one of the most prestigious honorary art prizes by being named Academician of the International Academy of Fine Arts of Quebec (2011).
For more information, please consult the website art gallery Exposition Angelica at: www.expositionangelica.ca