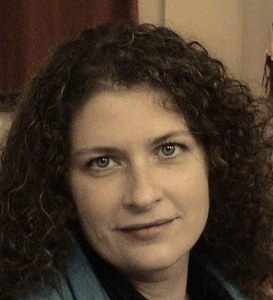 Erica was born in Athens, Greece in 1967 and grew up in St.Louis, Missouri, U.S.A. In 1990 she received her Bachelors of Fine Arts degree from Washington University in St.Louis. She went on to receive her Tamarind Master Printer Degree (TMP) from the Tamarind Institute in Albuquerque, New Mexico in 1991. In 1992 she moved back to Greece permanently and since 1999 has been teaching Drawing at the University of Thessaly in Volos in the Department of Architecture as well as Non-Toxic Printmaking since 2007. Since moving to Greece she has also collaborated with many artists from Europe and the Balkans printing Lithographic editions at the Hilios Printmaking Workshop in Thessaloniki. She has participated in several printmaking Biennales and has had the opportunity to teach lithography at the University of Belgrade, School of Fine Arts, Serbia. Her solo exhibitions include painting and printmaking techniques. While her group shows also include multimedia linoleum prints on canvas. She is currently studying Byzantine iconography as well as giving seminars and promoting non-toxic printing in Greece.

The Series "Greek Motifs" reflects my desire to create new images using familiar motifs from the rich and endless history of Greece. Each motif has been researched and selected from a specific era - cut from linoleum and printed onto a stucco-like surface giving the image distrested effect and a sense of "elapsed time".