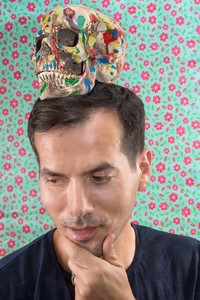 “Take an object. Do something to it. Do something else to it"-Jasper Johns
I'm hugely influenced by dada and neo-dada.
In this photography project, I explore a peculiar combination of photography, painting & collage.
I create three dimensional collages with found objects, food and cheaply printed old paintings.
I turn pre-existing works of art into Duchampian ready mades and take photographs of them.
I use strong shadows, layering, crumpling and folding effects to give a three dimensional sense in the final work.
I reduce the details and forms of painting by covering objects, food.
Copies of old masters paintings initially evoke viewers' memory.
By using unexpected juxtapositions of objects, I try to create ambiguity and pull viewers' attention deeper to my photographs.
In many ways, I examine new type of still life.

Andy Warhol painted Brillo Box in 1964. Everything in Modern Art changed completely once again. The project you are viewing is called “ After Brillo”.
I’m mesmerized by grocery stores and colorful packaging materials.
In this project, I’m combining Pop Art & Neo Dada. I create small sculptures from re-cycled packaging materials, food and found objects. This project is a marriage between Warhol & Duchamp.
Art works are made entirely with pre-existent materials. My contribution is in making links, putting them together and taking photographs.
Familiar objects are transformed into unexpected strange but simple forms. They are surrealistic juxtapositions of objects. Reality is altered. They are no longer ordinary things.
Even though photographs are still life but they are not in traditional ways. They are flat and colorful. There are Matisse-like pattern-overlapping and deliberate shadows. Horizon level is eliminated. Point of view is slightly above and slanted that gives viewer the feeling of cubist composition.
With After Brillo, I’m exploring new visual language of art and perception of reality. At the end, I’m searching for the relationship between fine art and mass culture.