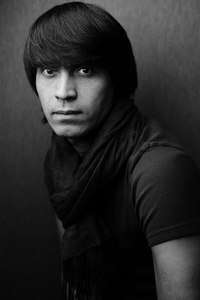 Fazulzyanov Ilgiz was born in Zelenodolsk, Russia, in 1968.
In 1990 he graduated from art school as an interior designer. He founded a studio, which manufactured stained glass and silk painting, in Kazan. In 1992 Ilgiz opened his first jewelry workshop. Combining historical and cultural heritage with up-to-dayt technologies and new trends in art, he creates highly artistic works of national art. Today they can be seen in museums of Kazan and Moscow.
In 1994 in Pakistan Ilgiz received the first prize at the International contest of Young Jewelers from Muslim countries for a setting for the Koran.
Then he actively cooperated with the Armory in Moscow, where he studied European style and used it in his work. Ilgiz masters all jewelry manufacturing technologies by himself.
Since then Ilgiz has become more interested in jewelry using so-called «hot enamel». In Russia, for example, in Russia Faberge used the same technique.
Ilgiz was attracted by the complexity of manufacturing and unlimited opportunities of working with enamel, and in 1997 he presented a collection of jewelry with «blank» and «stained-glass window» enamel in France. A few articles in prestigious magazines of France, for example, the «Figaro», the "Nice matin" and others, were dedicated to Ilgiz and his works. For three years Ilgiz has been regularly collaborating with the leading exhibition centers of France. He has also been participating in antique exhibitions. Experts of such major companies as «Cartier", "Van Cleef & Arpels" and others highly appreciated the jeweler’s works. Works by Ilgiz are in grate demand among customers from France, Germany, Italy, Denmark. A lot of high-rank officials have works by Ilgiz as governmental presents from the President of the Republic of Tatarstan.
Since 2000 Ilgiz has been regularly participating in the most important and prestigious exhibitions in Russia. A lot of his works by right have been awarded prizes at international competitions held within the framework of exhibitions.
The whole process of manufacturing jewelry, a sketch and each subsequent operation is performed by Ilgiz alone. He is not afraid to use a mixture of different styles and trends, as well as any materials, to embody his ideas. However, the jeweler’s favorite trends in design are Art Nouveau & Art Deco.
To date, Ilgiz the first Russian jeweler, who has become by the champion at the World Jewellery Competition of jewellery art in Hong Kong two times 2011/13. The unique Russian jeweler, sold at auction «Christie's» in London and «Bonham's» in New York.
Company «Ilgiz F.» has a lot experience in holding exhibitions and presentations as in Russia and abroad.
In may 2014, the jeweler-artist, Ilgiz Fazulzyanov won the all-Russian competition of jewelry art under the patronage of the Ministry of culture of Russia. As the Main Prize, Ilgiz was shown on one of the most important exhibition venues in Russia - the Moscow Kremlin.
And 31 March 2016 will begin a solo exhibition of Ilgiz Fazulzyanov in the Kremlin of Moscow.

The most interesting in my design, I believe the use of hot enamel. I am both a designer and manufacturer of jewelry. It helps me 100 percent to do the intended work.

In 2010 I first used faceted pearls. Since then a lot and are happy to work with him.

For this pendant I received the Grand Prix at the international competition of jewelry design in Hong Kong in 2011.

The Pendant in my favorite style - Art Nouveau