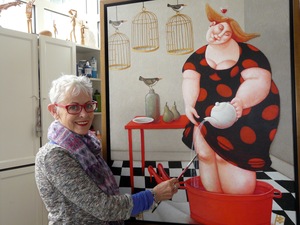 Ada Breedveld was born in Dordrecht at the start of the Dutch "hunger winter" in 1944. Together with Ada's brothers, her parents fled the ruined city of Rotterdam. Existence was difficult and hard, just as for any post-war child. Happily, Ada found a lot of enjoyment in drawing and painting.
Her best known works, in which Ada pictures her opulent and vivacious women, originate from the comic series Sjaantje. Ada created this comic series for her mother, who had suffered from corpulence during her lifetime. Ada wanted to let her mother come to life again in her work, emphasising the pleasant and jolly aspects. Her paintings are as it were a joyful renaissance of her mother. All this has been a source of inspiration for Ada Breedveld now for more than 25 years. The joyful pictures of ladies are now popular with a broad public and not only in the Netherlands. Ada has held exhibitions abroad, where she now also has numerous admirers. Ada's works are exported to Germany, America, England, Switzerland and Japan.