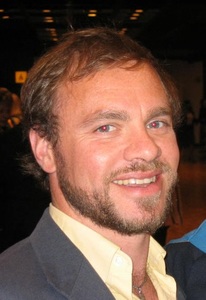 A classical painter for the digital age, Dowdeswell sources his ideas from images presented in the mass media and the scenes he witnesses while travelling and gazing out of windows. He is fascinated by the anonymous lives of others, the daily unfolding events in everyone's lives which we will never know about while his painting reflects the blurred line between hand crafted artwork and that which is digitally produced.

With a degree in America history and politics, Dowdeswell didn't come to art until into his 20s and that socio-political heritage underpins the vast majority of his oeuvre, from his installations 'Our Addiction is Killing Us' to his recent painting 'The Consequences of Conspicuous Consumption.'

The Consequences of Conspicuous Consumption

Dowdeswell coined the work 'Vortescape' in 2013 to describe his complex cityscape paintings.

These images re-invent elements from the avant-garde and the canon of art history to discuss the anonymous lives of others and the strangers who inhabit the urban landscape. Employing exact detail and a meticulous application of paint Dowdeswell's hand crafted masterpieces also raise vital questions about the line which is blurring between physically produced and digitally produced art.

“The Consequences of Conspicuous Consumption”

Dowdeswell's epic tale of life in the urban landscape. This is a frenetic world of fast cars, fast trains, neon lights, big brother, commuters, shadows in the underpass and the anonymous lives of others.
A socio-political undercurrent runs throughout the piece with references to the effects of capitalism and excessive consumerism, the threat of terrorism, global warfare, social housing, prison, and our relation swift strangers in the city, whom we pass in the streets everyday but may never know the stories of their lives.

Dowdeswell's polemic on the growing gap between rich and poor. The canvas itself is divided into three levels with the poor at the bottom with references to broken social housing, a queue of proletariats and a graveyard, in the centre are the middle classes with their bland suburban dreams and overcrowded office blocks, while the wealthy reside at the top of the painting surrounded by oil fields, stocks and shares and big brother.

Commuters, conspirators, big brother, fast cars, fast trains, the anonymous lives of others and a hidden call for help. These are processed people living processed lives with the same clothes, the same expressions and the same drives. Dowdeswell's painting discusses the dilution of identity, the effects of the mass media on our sense of who we are and the artists own fear of being stereotyped and cast away as being normal.

The sun rises above the horizon as Dowdeswell journey's along interstate 5 from Los Angeles to San Francisco.