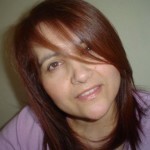 Biography/Curriculum
My name is Anna Maria Fazio, I was born on the 20th of November 1965 in Orbetello (GR). I have loved painting and drawing since I was a child; a quite common passion among children, but it was different for me. When you spend your days in the country, where nature shines in all her glory, and you grow up with your paternal grandfather, self-taught painter like me, you breathe naturally the passion for art. It could seem an ordinary scene: a grandfather teaching her granddaughter the basis of drawing, the use of colours, but this for me was a steady exercise and not a pastime. I was fascinated by his force, his passion, the tension of his hand which trembling (Parkinson’s disease afflicted him for years) made him hold tight the pencil, the crayon, and it conveyed on that white paper his soul, creating wonderful drawings and portraits even though it was a true physical torture for him. Yet, he did not give up. I think that I have inherited his determination and his passion that led me to start studying fashion design. I wanted to light my fantasy and my creativity. In 1980, I moved with my family to Lago Maggiore. In 2006, I decided to spread my “secret wishes” entrusting my works to Internet. I started drawing and painting trying to reproduce the works of famous artists, portraits, animals, still life. However, figurative art did not fit my artistic expression, so I began an evolution. I try the informal abstract art. Materic art charmed me much more; feeling the colour vibration under my fingers was electrifying. I tried to explore different techniques and materials, exhibiting my works in many collective expositions such as: Rome, Milan, Moscow, Brussels, Paris, Venice, Olbia, Tokyo, Monte Carlo, New York. In 2010, I embraced writing, starting a path of artistic and personal growth that allowed the publication of five erotic books. In the last three years, my career as a painter was on stand-by mode, since I have been committed in a tough but no impossible project. My passion for psychology and gender reading involved me so much that I decided to present my inner and personal style which is a keystone of my artistic path. The tales into the paintings... My way to tell world – through pictures and pages - restlessness, emotions, fears, obsessions, loneliness, and love of protagonists who will find the picture again in the book and vice versa. Every new book will be absorbed into colours and printed on the pictures dedicates to it. Website: www.annamariafazio.jimdo.com Blog: www.annamariafazio.wordpress.com Artistic publications Setal 2007 Prizes anthology, poetry prose, and Figurative Art Angelo Musco- International Academy "Il Convivio" 2008 Catalogo Openart 2009 - Sale del Bramante, Roma, "HISTORIA MUNDI - Le medaglie raccontano la storia, l'arte, la cultura dell'uomo" Year I°- N° 1 – February 2009 "L'Arte e il Web" Verso nuove forme d'espressione della creatività, ed.2008 immagin@ria editrice "XXV Premio Agazzi" 2009 Boè - November/December 2009 International Award "Tokyo" January/February 2011 – Magazine BOE’- January/February 2011 OverArt Prize Effetto ARTE 2012 OverArt May/June 2012 “I segnalati” 2012 EAEditore International Contemporary Artists vol.V - I.C.A Publishing, 380, Lexington Avenue, New York, NY, US. The author is among the 287 artists worldwide who will be mentioned in the prestigious book DIAC 2013 - Dizionario d’Arte Contemporanea 2013 – Edizioni Del Ghiro Bologna Gli Eredi di Dante Alighieri 2015 EAEditore – The author is among the fifty-eight writers mentioned in the book. Awards and prizes Trophy “Città di New York” 30 January 2010 International Award “Tokyo” 21 May 2011; Prize “Effetto Arte” 28 January 2012; International Award “Le Louvre” 27 June 2012; Noble Prize for art awarded in Monte Carlo 30 October 2012. Bibliography 2010 - In mio potere...tu - Il Filo Albatros - (Honourable mention of Literature and Theatre National Prize “Nicola Martucci” City of Valenzano 2011 2012 Edition - Gocce di Eros - Youcanprint - E-book and paper book 2014 - Peccato è…non farlo - Youcanprint – paper book 2014 - Peccato è non farlo - E-book Narcissus 2014 - Oppio Fuoco Ossigeno - La storia di un amore impossibile - E-book Narcissus 2015 - La linea sottile – Part One - Thriller (it partecipates with an unprinted book) to the Literature Prize “Gli Eredi di Dante Alighieri” awarded on 28/02/2015 - Guicciardini Bongiovanni Palace - Florence. 2015 - La promozione - E-book Narcissus 2015 - Promotion - E-book English version - Narcissus 2015 - La stanza rossa - E-book - Narcissus - The Red Room Love is not enough

Informal abstract art painter from 2007 to 2013. In 2015, the artist started her new path and artistic conceptual style, where the idea, both the project and its perception prevail on the aesthetic, immediate, and subjective perception of the interpretation of the same. The artist, painter and writer, wants to encourage the “addressee” of the work (picture) to a psychological identification with the characters of the work (novel) whose strong and emotional plot completes the whole artistic comprehension