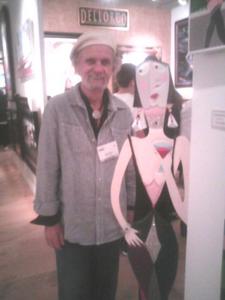 RAY LARSEN is well known for his paintings, sculptures and woodworking, creating uniquely, sculptured frames for each painting. He is also known for his whimsical, gently satirical, tongue-in-cheek, social commentary, having taken a lifetime to evolve his very definite individual style, using brilliant, vivacious color with it's own frivolous language. His painting are peopled with lively folk who involve the viewer in their activites.

LARSEN was born in Chicago, but raised in Denmark. He originally apprenticied with highly regarded Copenhagen artist, Willy Nielsen. Then he returned to Chicago for his formal training at the American Academy of Art. He has done private commissions in the United States, England and Denmark.

He has exhibited his works in many galleries including: De Ligny Gallery, Fort Laudedale, Micheval Gallery in Lauderdale - by - the-Sea, Scali Gallery in New Orleans, Martin Gallery, the 5G Collection Art Plus, Jeffrey Browner's former Art Gallery, ABC, Masterpiece Gallery in Mizner Park all of Boca Raton, Nancy Cunningham Gallery and Arts Arena in Delray Beach, E Gallery in Lake Worth and a solo show at the Artist Showplace Cooperative, Inc. also in Lake Worth, The Coral Springs Museum Of Art in Coral Springs, and Sierra Studio in East Dundee, IL.

“Dancing at the Ball”