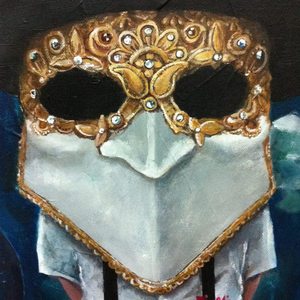 Konan Lim is a Dubai-based Filipino artist. Born and raised in Philippines, where he began to discover and enhance the passion of art at a very young age. He joined and won numerous art competitions during his childhood era. On year 2005 he received a degree of Bachelor of Science in Architecture at Western Mindanao State University, Zamboanga City, Philippines.

2007, He moved to Dubai and work as an Architect but his passion over painting still the utmost devotion. Since 2012 to recent year he starts participating on several group exhibitions from local art scene to international show. He is also commissioned in some mural art events & collaborated with several artists.

His style has been formulated through whimsical happy thoughts into a realistic interpretation. The characters are stuck in childhood nostalgia, blended with classical surface on present pace. Cuteness overloads with a touch of strong colorful and playful surprises, mixed of dark suspicious atmosphere. The detailed elements intertwining the blurry background provoke a thrilling question.

It stitches different emotions into a piece of story, where he rhymes them by a distorted illusion the way it balances profoundly . Something romantic yet controversial, certainly marks an endless smile.