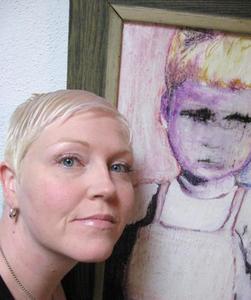 Allegra Sleep was born in Nicaragua just as things were heating up and ready to erupt into the Revolution. She was in her first group show at the American Embassy in Managua at age two. She lived in Central, South America & the Caribbean until a move brought her to Taos, in 1990. Primarily self-taught, the artist grew up watching her mother paint. Allegra works in acrylics and watermedia, and often uses bright primary colors. Her work frequently references scenes from a childhood in Latin America; as well as old black and white family photographs. She was a Finalist in The Artist's Magazine's Annual Art Competition in 2013, and has been featured in Southwest Art Magazine twice. The artist has shown and is collected Internationally. Find her work at Wilder Nightingale Fine Art, on Kit Carson Road in Taos, New Mexico. Or online on facebook at: Allegra Sleep Fine Art. Contact allegrasleep@hotmail.com

Work in acrylic and mixed water media on hardboard by artist Allegra Sleep.