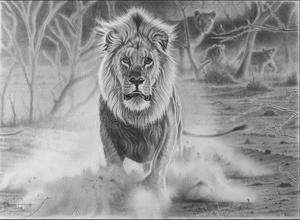 Born in Zimbabwe on the 16th of December 1986, grew up on a rural area, western rural of the city of Bulawayo in Tsholotsho. Started drawing as a boy & enjoyed the challenges involved in typical African rural as cattle herd with friends. This served as an inspiration as my art interests began to emerge in drawing cattle and wildlife animals like the greater kudus as we would encounter such during cattle herding in the bush.

Moved to Victoria Falls in 1999 for Secondary Education at Mosi-oa-tunya High School & later began pursuing Art as a career during the summer of November 2002 soon after finishing O’level education. Inspired & introduced to professional art industry by Sanele Dhlomo & the late Jimmy James Nkomo who have been drawing & painting at the Victoria Falls Art Corner since then next to Lola’s Tapas, a restaurant once known as the River Cafe at the Trading Post building, Landela Complex, Victoria Falls.

During the summer of 2008 moved to Johannesburg, South Africa in search for greener pastures amid the Zim crisis. 2009 met a man called Johan Le Roux living in Brits who willingly assisted in selling my works from his home gallery. Moved back to Zimbabwe close of 2010, October and for a period of five and a half years have known & supplied his home Gallery (Johan) with drawings.

Without any high profile education, Victoria Falls is rich with its world class natural beauty, young & upcoming artists & rubbing shoulders with professional wildlife artist like Larry Norton has kept the inspirational wheel rolling & serves as an advocate to sharp expressions

Market needs arise on a daily basis & seeking for other opportunities & avenues to exhibit my works become a vital point. Currently working from a small home studio & still market some of the works at the Art Corner where the entire professional dreams begun. Looking forward to reach greater heights in this industry is the daily meal of the soul.

Art has always had something interesting about it all the time. And this year, I've had one of an up-close personal 'ONE'. Creating this portfolio serves to remind me this year's xpeience.

It's interesting to watch an African elephant drink and bath. It reminds me of my outdoor Weekend camp-outs with friends bathing using a small bucket...lol

You're like watching the "exodus" when elephants march to and from the waterholes... #HwangeNationalPark