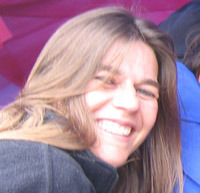 Heather Crowther (1970), a South African artist living in the Czech Republic, encompasses the concept of transformation while hinting at what lies beneath, through the power of suggestion. Pushing the boundary of what is psychologically comfortable, she works on an emotive level that emphasises the sensations viewers are left with. From working in pure line and form, to her detailed drawings and paintings, viewers can't help but think there is something more.....something beyond the immediate that evokes latent emotional reactions in their own psyche.

My 3D line drawings are drawn freehand using puff paint that creates a raised relief on the canvas itself. They are based on Sacred Geometry elements that are found throughout our natural world and that all life forms are based and built on. they work with the fundamental 5 platonic solid building blocks that contruct all living forms.

In the works I have also specifically usen certain mediums to create different effects. There are elements drawn with normal paint seen in daylight, other elements are done with UV reactive paint (seen under blacklight/ UV), and a third level are done with photosensitive 'memory' paint, that stores light and shines in complete darkness. Therefore each image has a different effect and appearance, depending on what lighting conditions are applied, thus are multiple images all within the same simpe line form.

It is this idea of how natural elements such as light can change our taken for granted world, and reveal things that are there, but that we just haven't been aware of, that I find incredibly intruiging.

This work depicts Metatron's Cube, which depicts the platonic solids within the same form.

Metatron's Cube is a two-dimensional geometric Sacred Geometry figure created from 13 equal circles with lines from the center of each circle extending out to the centers of the other 12 circles. Six circles are placed in a hexagonal pattern around a central circle, with six more extending out along the same radial lines.The pattern delineated by many of the lines can be created by orthographic projections of the first three Platonic solids. Specifically, the line pattern includes projections of a double tetrahedron (aka stellated octahedron), a cube within a cube (aka a tesseract), and an octahedron.

This 3D line drawing is a visual depiction of the mathematical formula Phi, and shows how the same golden ratio proportions are repeated within themselves on a never ending basis.

It is intrinsically linked to notions of harmony and proportion, often called the Golden Proportion, as a mathematical depiction of natural beauty. This ratio is the relation between the size of one part of the body to another, which is all in perfect proportion throughout our body. And this phenomenon is shared with all living things throughout the natural world, both plant and animal. It is a universal language of beauty, harmony and proportion.

This is one of my 3D line drawings, drawn freehand using puff paint that creates a raised relief on the canvas itself. It is an interpretation of a crop circle design, coupled with Sacred Geometry elements that are found throughout our natural world, and are the building blocks that contruct all living forms.

3D line drawing, drawn freehand using puff paint that creates a raised relief on the canvas itself. Based on Sacred Geometry elements that all life forms are based and built on, found throughout our natural world. This image depicts the Flower of Life, based on the fundamental 5 platonic solids that are building blocks that contruct all living forms. It is a symbol of sacred geometry, said to contain ancient, spiritual value depicting the fundamental forms of space and time.

3D line drawing, drawn freehand using puff paint that creates a raised relief on the canvas itself. Based on Sacred Geometry elements that all life forms are based and built on, found throughout our natural world. They are the building blocks that contruct all living forms.

A range of paintings using a combination of acrylic, airbrush and 3D puff paint. They are abstract in nature, but tap into universal principles of Sacred Geometry, energy flow and natural forces continually at work in our world.

This painting depicts a mathematical knot depicting a never ending torus rotation, that symbolises the infinite energy that moves throughout our uiniverse on both a physical and metaphysical level.

A depiction of pure energy and creation, the flow of life and the 5th Ethereal dimension. This is ties in with Sacred Geometry, which form the underlying building blocks of our universe, represented by the golden ratio spiral and the dodechendron, the symbol for the 5th dimension where the 4 elements (earth, water, air and fire) are combined to form the 5th element, taking place int he 5th Dimension. The bold colours reflect the raw creative energy that allows everything in out existence to become manifest in physical, material forms.

This portfolio is a collection of my rust & charcoal drawings. An impression is rusted onto the paper, and then worked over with charcoal to create a completely unique abstract drawing. I will rust an image onto the paper, and then work it over where I will actually draw with the rust itself and also charcoal (burnt wood), to make the final artwork. My themes are all about nature, energy and the cycle of life. I don't have an end image in mind when I start a new piece, but it just comes through to me as I'm working, where the drawing 'talks' to me, subconsciously guiding me along. It's an interactive process of give and take, until the final picture emerges.

This drawing reflects a moment in time, when life began on earth and evolved from both the spiritual essence and material matter itself.

Rust and charcoal drawing, inspired by the origins of life, where it began and where we came from. How did life originate, and what role does the ethereal dimension play....?