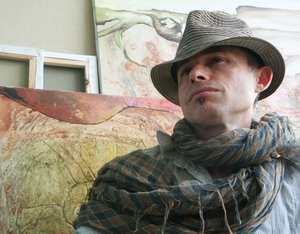 Was born in Ukraine in 1958.
In 1991 graduated from Industrial Art Institute in the city of Kharkov.
In 1992 worked as a designer at the regional TV-studio "Tonis".
1993-1994 - participated in the annual city-wide art exhibitions.
Took part in the 1994 exhibition in the gallery of the Kharkov Opera Theatre.
In 1994 cooperated with the Trotuar art group (the Palitra gallery),
Since 1995 has been working in Israel. Among other things, has been engaged in painting
and sculpture for theatrical scenery in Tel-Aviv and Jerusalem theatres, including
the State Israeli Opera.
Performed art work for television and feature films. I live in Tel Aviv

The paintings of last years which reflect my impression of Tel Aviv city, people in the city and architecture.