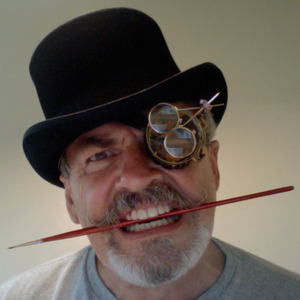 Marcel Franquelin received a traditional artistic education in France, at Les Beaux-Arts and the University of Lille, before teaching art and art history in France and later in the United States. After producing copies of masterpieces for five years, he specialized in traditional glazing techniques typical of the nineteenth century masters.
With over 35 years of experience in Realism, Marcel Franquelin now teaches and paints in his atelier near Princeton, New Jersey,, where he has several dedicated followers.

"Art is illusion"
I have always been fascinated by the visual impact that comes from the works of the Masters; their paintings are magic, bringing you "elsewhere", way past the simple surface of a canvas. I was trained very traditionally at "Les Beaux-Arts" in France, and spent my life studying and teaching art. I understand that realism is not about the truth, but rather the illusion of the truth: paint strokes, along with a well thought palette will bring magic to the viewers, making them want to touch the illusion of a three dimensional object, wonder about the life-like vision of a portrait. I believe it is the artist's mission to make one look "again" at the marvels of our world, to make one stop and contemplate, think, dream and imagine.
I truly believe that art is not in the content, but rather in the delivery: an idea, a vision, just like a play for theater, can be either boring or quite entertaining, revealing or even fascinating; it is all about how well 'directed" the representation will be.
I do not intend to shock, shake or upset anyone looking at my work, I do not seek stardom, I just share my visual interests and my passion for the arts.
Marcel Franquelin

A little bit of everything....

A little bit of this and that...