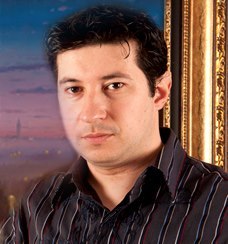 Born in 1975, Alex Levin, is an artist whose works are admired worldwide. Originally from Kiev, Ukraine, has been displayed in numerous private, corporate and institutional collections in the U.S., Israel, France, Italy, Ukraine, Switzerland and Belgium. His work focuses on surrealism and realism and features a range of work using oil, acrylic, pencil, charcoal and tempera paints. One of his favorite and most used techniques is 16th century multi-layering technique using tempera and oil without using brush strokes.

Alex Levin eventually immigrated to Israel and served three years in the Israel Army. In 1997, he entered the industrial and web design program in Tel Aviv which was a great benefit for his art work. Levin’s work has been acknowledged by many influential figures, including: actor and producer Richard Gere, Madonna, jazz player Oscar Peterson, and former president of Israel Ezer Weizman.

For over 10 years, Alex was studying new art styles and techniques with Professor Baruch Elron who was the Chairman of Israel Artist Association.

Currently Alex Levin is working on the following themes: “Tradition of Jewish Heritage”, “Tel Aviv - The Hill of Spring”, “Venice through the mask's eyes” and “Symphony of Rain”.

“Tradition of Jewish Heritage” is a collection of work of Jerusalem's holy Western Wall and its surrounding religious neighborhood. Levin has captured the inhabitants of Jerusalem's ultra-orthodox neighborhood of Mea Shearim, Jewish Attributes and the people at the Western Wall. In 2007 Alex received the Medal Award for the Contribution to the Judaic Art from the Knesset.

“The Spring Hill” is inspired by his favorite season, and is devoted to Tel Aviv - its people, building architecture, sea and beaches. It depicts people against snow white buildings on sunny days with clear skies.

“Venice through the mask’s eyes,” takes a completely unique approach and presents the viewer with the most prominent feature of Venetian carnival – the Mask. His earlier paintings from "Mask collection" were introduced in 2002 in Venice and gained Levin a scholarship to Venice Academy of Art. The program supported artist's continuing development and enables them to devote substantial time to the creation of new work.

“Symphony of Rain“. Each paintings was inspired by the music of different composers.
One painting completes the other, one composer is replaced by another, the misty morning transforms into a rainy evening and star-filled sky over the lagoon: a puzzle of forty paintings describing the dream-city on water – VENICE!

Venice is a truly magical place. It’s a museum-city, sea-city, dream-city. Venice cannot be seen with an outsider’s eyes – cannot be felt with an outsider’s heart.
Often enough, the name of a city arouses certain associations or memories in a person. In the same way, I associate the name ‘Venice’, first and foremost, with the smell of the sea and the shrieks of seagulls. Perhaps, there is no other city like Venice – slave to the sea, its gifts, its morals. And there is not a single place in this world that preserved its uniqueness and historical integrity like Venice.
Anyone who has visited Venice at least once will feel a connection with this magical location on the globe. Venice is so tiny in size that as you fly over it, it disappears out of view before you know it. But in the number of art works and architecture there is no such place on the planet.
I had never seen a city more beautiful than Venice. It is utter enchantment, brilliance and joy of life. It has canals for streets and alleyways, and gondolas for cars. The architecture is astounding, and there is not one place that does not arouse a historical or artistic interest. You just glide in a gondola, observing the Doges’ Palaces and Desdemona’s house, the homes of famous artists and churches… And the sculptures and paintings in the churches are of beauty no one ever dreamed of. One word: enchantment.
The first time I visited Venice I was 17, and I was absolutely astounded by the city. I wanted to live there. I wanted to dissolve in the colours of this lagoon. I wanted to be a part of this mystery-city. And this was no coincidence, for this city does not leave anyone indifferent.
Once, Frédéric Chopin and George Sand watched raindrops streaming down the window, and Chopin noticed so much music and improvisation in the drops. It is because we see a second of this moment and then everything changes.
The Venetian lagoon has its own unique light and colours, especially when it’s raining and everything is immersed into a mystical mist. I tried to depict how, through the streaming raindrops and to Vivaldi’s, Bach’s, Handel’s and others’ music, a painting is born – one that you can not only see but also hear. At times, when paints stream down the canvas like raindrops, they bare new compositions and improvisations.
That was when I had the idea to create a series of musical paintings called ‘A Symphony of Rain’.
I draw the music of the rain!
Music usually arouses certain thoughts and feelings in me, gives rise to memories. And this image that sprung in my imagination can be drawn. My painting itself acquires musicality, almost as if melodies resound from my canvas.
Music has always been my inspiration. The oil paints are my notes, and the brush is my musical instrument.
“A Good painting is a music and a melody which intellect only can appreciate,” said the great Italian artist, Michelangelo Buonarroti.
Ilya Repin noted that the colourful flavour of Rembrandt’s paintings sounds like marvellous orchestra music.
It’s hard to name a composer, who has not reflected his fascination with nature in his music. The sound of rain, songs of the birds, the iridescent water streams sparkling in the sun… All these sounds of nature inspired composers to produce their musical masterpieces.
Music often brings various images of nature to mind. Nature and art are inseparable because nature enters each person’s life forever from childhood.
Claude Debussy, for instance, was an exceptional master of sound painting. The composer was deeply influenced not only by music but also paintings and poetry.
In the search for new means of musical expressiveness, Claude Debussy made a number of discoveries in and around harmony. With the help of new and unusual techniques, the composer conveys nature’s tiniest details – the play of light and shadow, sun glares, the splash of streams…
Listening to musical work can heighten people’s senses and unite them. Human hearts are connected with an incredible symphony of sounds.
The paintings portray cathedrals, palaces, bridges, gondoliers on their amazing boats – light, gentle, big-nosed birds that barely touch the water and shudder at the slightest wave. And everything, from the sky to the ground is inundated with the sun. It all appears instantly to the sounds of divine music of the brush and paints on the painting.
Each paintings was inspired by the music of different composers.
One painting completes the other, one composer is replaced by another, the misty morning transforms into a rainy evening and star-filled sky over the lagoon: a puzzle of forty paintings describing the dream-city on water – VENICE!
I compare Venice’s frailty with the drops streaming down the window. This pearl-city descends lower and lower beneath the water surface almost every day. And all that is left to do is imprint this moment in our memories – this moment of joy.
Like a raindrop, one day it can completely disappear underwater in an instant, and I find it important, as an artist, to stop time on my canvases, and, with their help, father new paintings under the name ‘A Symphony of Rain’.

This painting has been inspired by music of Vivaldi - Four Seasons

This painting has been inspired by music of Schubert - Ave Maria