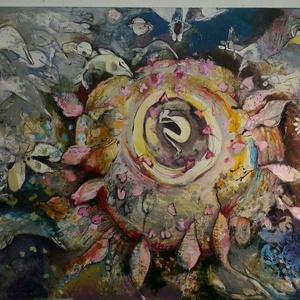 
Ana was born in Barcelona on the 18 of October 1968.She studied paint techniques in Arts y Officis Llotja School in Barcelona.
After various exhibitions, she travelled to London in 1989 where she breaded her studies and work in Art education projects in diverse venues.

1994 she take part in a sculpture project on the boat HMS President, River Thames, subsidized by the Princess Trust. The president of this Trust is Prince Charles of England.

During this years she exhibits frequently in London for example:
Mall gallery solo exhibition in 1993, collective exhibition like the William Morris Gallery in London 1992.