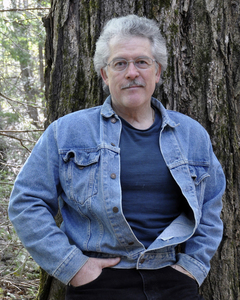 Michael Dumas was born September 20, 1950, in the village of Whitney, Ontario, situated on the eastern entrance to the 7,725 square kilometres of wilderness that is Algonquin Park. As a young man he worked as a ranger in the interior of the park, honing his skills as a woodsman and earning the necessary funds to pay for his studies at Humber College of Art in Toronto.

During his time at Humber, he met master artist Lewis Parker, and spent his post-graduate year studying solely under him. Following this he served an apprenticeship under Parker at Lazare and Parker studios in Toronto, and later worked as a staff illustrator at Ginn and Company educational publishers.

Michael began his full time career as an independent artist in 1974 with Edwin Matthews as his agent. Through this arrangement his art found its way into many corporate collections such as Molson's of Canada, Quaker Oats, the Outboard Marine Corporation, and was used in promotional campaigns nationwide.

Canada Post commissioned Michael to create artwork featured on Canadian postage stamps, and the Royal Canadian Mint produced four platinum edition coins designed
by him. He was issued a Canadian Exploration Grant from the Canada Council for a five year project depicting Canadian Endangered Species. This collection of thirty original works was exhibited at the McMichael Canadian Collection and was reproduced in an exclusive limited edition portfolio.

Further projects focusing on conservation included Canadian Endangered Birds of Prey for The Art of Survival campaign, Project Panda and the Swift Fox Recovery Project for the World Wildlife Fund Canada, Save the World's Birds and Albatross 1000 sponsored by the Suntory Corporation, Tokyo, Japan. He was the first artist to receive the Professional Conservationist Award sponsored by Molson Canada and the Wildlife '87 Award sponsored by the Province of Ontario. At the time it was estimated that he was instrumental in raising over five million dollars for conservation causes worldwide.

Michael's artistic accomplishments and charitable efforts has resulted in recognition from organizations, celebrities, and notable personages on an international basis. In 1990 he was the special guest artist at the International Conservation Summit in Osaka, Japan, where he was introduced to Prince and Princess Hitachi of the Japanese Imperial Family and HRH Prince Bernhardt. His first solo show in Japan, in 1989, received the attention of Prince MiaDenka of the Japanese Imperial Family resulting in a royal request for a private tour of the exhibition accompanied by the artist. In conjunction with the World Wildlife Fund events, he has enjoyed the company of HRH Prince Philip, Duke of Edinburgh, actors James Stuart, Lorne Greene, Loretta Switt, and Patrick Duffy. He has also collaborated with Dr. Richard Leakey in his conservation efforts in Kenya.

Although Michael's primary focus for much of his career has been nature oriented themes, he is also recognized for his sensitive portrayals of people and reflections on human influences, both rural and urban.

There is something profound in the simplest act of being and it is expressed in even the most humble of every day experiences. I do not search for specific subjects to paint, but simply stay open to the idea that they will present themselves in time, and I trust myself to notice them when they do. There is something of a sense of discovery in this, as well as a heightened awareness of the moment. In this lies the impulse to paint.

Observing traditional single furrow ploughing at a rural gathering I was impressed by the enormous draft horses that responded so sensitively to their master's directions. The resting position of one horse in particular presented a strong natural design, and the presence of house sparrows that seemed undaunted by the giants at whose feet they dined made for a wonderful contrast in size. Sketching the separate elements in such a way as to emphasize these features and relationships in one cohesive image eventually resolved into the guide for the final painting.

“Influx: sparrows in the Louvre”

During a visit to the Louvre, I observed a single female sparrow fluttering high above the area containing classical sculpture. The contrast between this street urchin of a bird and the wonderful works of art struck me deeply. From time to time over the next few years I would think of that moment and had the feeling that a painting was waiting to be discovered if a relationship between a group of sparrows and the statues could be expressed as a narrative. The question 'What if the statues were aware of the presence of the birds?' provided the final conceptual notion to begin painting.

“In Her Father's Chair”

Shortly after the death of her father, I worked up the courage to ask Elizabeth if she would sit for me. I had known her since she was a child, and watched her grow up and eventually move away to start a life on her own. At the funeral, she read from her father's diary with such grace that I was struck by what a fine strong woman she had become. How had I not noticed this before? At the first drawing session on a late November afternoon, I was filled with this new found realization and a sharp sense of how life can impose itself on us in unexpected ways.