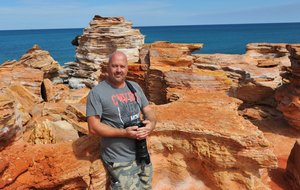 A.Professor Wayne Quilliam a foremost expert in the contemporary visualisation of Indigenous Australia.
Wayne’s unique style encompasses the spiritual and artistic dimensions of Aboriginal culture as his art is transformed through traditional and modern practices. Winner of the Aboriginal Artist of the Year, Human Rights Award and International art awards including being nominated as a Master of Photography by National Geographic he has created and curated more than 140 solo and group exhibitions throughout the world including Berlin, London, Cairo, Paris, Havana, Moscow, Vienna, Tokyo, New York, Jakarta, Caracas, Sardinia, Rome and Mexico.
The reason I am contacting you is to initiate discussions on hosting a physical or digital exhibition and/or have Wayne deliver a key note address, conduct an artist’s talk or deliver lectures.
Wayne currently has three exhibitions travelling the globe, the first titled ‘Lowanna’ meaning in traditional Aboriginal language ‘Beautiful woman’. The evolutionary series melds indigenous spirituality and contemporary nudes printed; art reviews have dubbed this series as the new movement in Aboriginal creation when it opened at the Museum of Young Art in Vienna.
The second show ‘Towindri’ meaning “where we walk” debuted at Qubbet el Ghouri, Al Azhar in Cairo, Egypt. The landscape art theorises the textures of Mother Earth and the influence these living patterns have on Aboriginal culture. He collaborated with one of the Middle East’s most distinguished art institutions who have since acquired the entire collection.
‘Ceremony’ is related to Wayne’s work in rural, remote and urban Aboriginal communities. These spectacular images visualise ancient ceremonial practices preserving culture, language and family.
Each exhibition is printed on frameless shinkolite which are easily transported in crates measuring 1.5m x 1m x 800mm deep. The shows are fully digitised and have been projected onto buildings in Times Square, New York and Havana, Cuba. Many institutions request different aspects of the work been merged into a single show including a major show being featured at G’Day USA in Los Angeles where the work was seen by more than 20 million people.

we are of earth