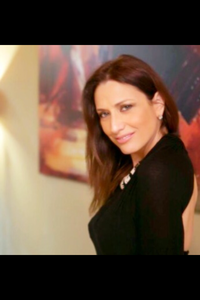 Joanna Kardiakou has studied painting, Interior Architecture and Decoration at ART AND DESIGN COLLEGE OF ATHENS.

She has studied next to the Fine Arts lecturer and painter Thanasis Makris and attended Art History by Manos Stefanidis (Director of the National Gallery).

She has also attended painting workshops of painter Tassos Rigas.
She is a member of UNESCO in the field of Arts, Sciences and Literature of Greece under the auspices of the Greek National Commission for UNESCO.
She is a member of the Chamber of Fine Arts Greece.
Her works exist in many private collections in Greece and abroad.

She has carried out the following individual and group exhibitions:

February 2009: Municipal Gallery of Piraeus under the auspices of the Greek National Commission for UNESCO

One afternoon in Provence

“One afternoon in Provence”

Sound of the deep

“Sounds of the deep”