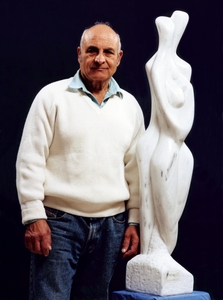 I was born in 1935 in the old city of Jerusalem. In the Independent war I participated the youth-brigade of the "HAGANA", in the blockaded city.

I was recruited to the I.D.F. and served with the Marines, upon the "Miznak" destroyer. In Sinai war I was recruited again and finished my army service as A.B.C. officer. Being released from the army i worked as a senior sailor with the commercial fleet. The first few steps in my art was while forming the "Gate of images" in my home and teaching Art.

in 1972 i earned my BA in Art & Education and MA degree in Educational administration & supervision in Haifa University. I was qualified as community worker of the social school in Jerusalem University and appointed as a consul in Haifa University. As a graduate of teachers seminar "Oranim" was teaching art sculpturing & painting. My art mentors were sculptors Michael Gross , Daniel Kafri and of the painters: Sima Slonim, and Arie Navon of Ein-Hod.

In 1985 i worked in sculpture workshops, in Carrera, Italy, specializing in several kinds of marbles in "CENTRO STUDIO DEL MARMO CARRERA". I also was taught arts in the Particular Education Schools. I studied wood & metal sculpturing in Ramat Hadassah & Oranim. In the last few years I was helping in Tiberius to rehabilitate families who lost their sons in the army. I was active in "Hanoar Vehachlutz" movement, went to the U.S. to reinforce the relations with the Jewish community and the Zionist Youth in the U.S. I worked in summer camps in "Rama" N.Y. were I was the head dept of sculpturing and the art of wood caring. In Qiryat . Tivon I was a member of the local Authority and a member of the social welfare committee. For 15 years i volunteered with Road Police the "Hytam" in Q. Tivon & Tiberius. Today, while retired i'm sculpturing in materials such as - Marble-Carrera, Basalt-stone, Metal, Wood, Ceramic & Glass in my studio in Yavne'el.

The main theme in my artwork is the human image. Part of the figures are abstract, made of Carrara marble and Marmara marble. Those material are my favorite as i learned to like them while working in workshops in Carrara, Italy. Another part is formed of metal, clay & concrete. In my work i strive to express the woman's beauty, tenderness & gentleness, much more than the man's strength. While visiting Florence, Venice, Athena, Paris, Luxembourg, i realized that placing human shaped sculptures in empty spaces in nature or in the town square, enables each person there & than to have an emotional experience.

He developed working skill with blocks of Rocks, forming a human figure that emerge out of the stone, revealing the sculpture that was hidden wrapped inside. A rock that is holding within it variety of forms and processes as they are kept frozen out of feeling deep love to life and to the forms in nature. My belief is full with hope and the yearn for creativity has no limits.

Achieving perfection will be accomplished through hard work, caused by the constant need to know and understand all the possibilities and limits of the material and the plasticity laws. As a sculptor i situated always with the dilemma between the expressive form and the plastic form. Supreme solution comes into reality in the human body. The Ancient Greek nature influenced me, and so i studied soon the limits of the material and the plasticity laws in order to reach perfection in forming the human figure. Knowing all the possibilities which are hidden in nude and having the right concept of the human body and forming them in nature is the a real ambition to reach an equality of the human image in the abstract & naturalistic sculpturing. Interpretation of feeling, i marks the image lines of the human body with a wave of rhythmic movement of arching & concurs that express the position that created them.

During the blockade period of the old city of Jerusalem, i obtained from my father the spiritual & material values while i was dealing with metals, precious stones and creative craft. There began my acquaintance of metal of all kinds helping him in his studies & work with the sculptor Michael Gross who is very appreciated as a powerful great artist. Together we form an environmental sculpture in Oranim college. Another talented sculptor that immensely influenced me was Dan Cafri. I was impressed by the gold and copper ornaments with the huge fresco paintings that were on the high dome ceiling of the synagogue "Rabi Yehuda Hachasid" where my father used to pray and of which the beauty and height overlooked all the churches and mosques of Jerusalem.

The art of Marble Sculpture

"And all the expectation are nonsense,

and all opening of hope were shut"