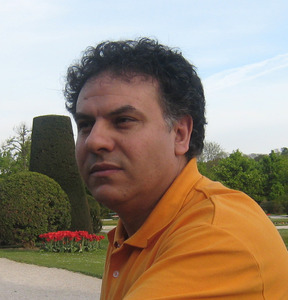 Aghzout was born 1958 in Tétouan, Morocco. Since 1987 he has lived in Vienna, Austria. He studied at IAV Hassan II and University Mohammed V Rabat, Morocco, the Ecole Normale Supérieure (ENS) Cachan, Paris, France and at Vienna University of Technology in Austria where he got a degree in electrical engineering (Dipl.-Ing.) and a Doctorate in technical sciences (Dr. Techn.) (winner of two international awards). He was interested in art already in early childhood, which at the beginning of the seventies was strengthened by the instruction with the fine arts professors Alami Bertouli and Ahmed Reboudi in Morocco. Several years he dedicates himself to pencil and ink drawings. In the eighties and nineties he engaged in watercolor, oil painting and passed finally to acrylic painting on canvas and paper. In his acrylic works he applies also the former techniques.
„Painting is a science“ – so he researches as an artist equally as in technique. He deals with color theories for years – his artworks are the result of it, only one stopover, the development always continues.
Science affects his painting - on one side precision, on the other abstraction. Within both areas he attaches importance to reliability.
Aghzout´s works have been presented in several international art fairs, exhibitions and museums. Collectors of high standing in several countries own his works. In 2010 selected works were presented in “International Contemporary Masters Volume III”, in the print edition of New York Arts Annual Top Websites Directory (winter 2010 issue) and in magazines and online publications, eg the New York Arts Magazine, and in February 2011 in the art book „International Contemporary Masters Vol. IV“, Santa Barbara, USA. He participated at exhibitions at the Southern Nevada Museum of Fine Art, Las Vegas (2010 and 2011) and at the Broadway Gallery, Manhattan, New York. In June and July 2010 he was selected worldwide as “artist of the month” by Art Fairs International, New York. Aghzout has been presented at several cultural broadcasts at Moroccan and Austrian television channels and at radio interviews.
. He was honored with the gold card „Ambassadeur de l´Espoir 2011“ (ambassador of hope 2011) at the forum „Marocains du Monde, Ambassadeurs de l´Espoir“, 20th - 23rd October at Istanbul.
For more information please see my homepage www.aghzout.com, Youtube, Facebook Profile, Google.
Aghzout´s theory (published in international artbooks and Television broadcasts):
"Painting is development of seeing and ability. Painting is a science and knowledge".
"Art is research, art is a science and knowledge".
“The richness of classical painting remains an important basis of my painting, but with abstraction based on science, a new dimension of contemporary art is opening up for me. The application of science within different areas undoubtedly gives a new light to modern art. Moreover the colors of Morocco converted into contemporary art, emotion, and the need to develop are also driving forces of my painting. Constantly adjusting my work during the painting brings it to an optimized final status, which gives a new chance to the observer to discover a new level of seeing and a chance to develop my work virtually, without constraint or guidance. This fast development of seeing depends fully on the observer, and allows him to enjoy his new individual virtual painting with another perspective, another temporary level of seeing. In this sense I have developed a new dimension in painting video style to demonstrate and illustrate this perception of art.
“Painting is development of seeing and ability. Painting is a science and knowledge”.
“Art is research, art is a science and knowledge”.”

„Aghzouts artworks speak their own language. More than his words… mild light and strong colors… his own color palette. His „development of seeing“ leads to compositions with power and energy, emotion and harmony. They reflect the colorfulness of Morocco, its humans, its culture, from which already artists as Delacroix, Miró, Matisse,….were fascinated.“

“Aghzout transforms the light and the bright colors of Tétouan into painting. Behind there is an intensive examination of modernity in visual arts and in science and technology. Thus the colors in these pictures are at the same time physical phenomena and apparitions of light and human emotion, saturated with culture. Colors as at noon in Morocco, colors of the sky, the sea or the desert become dynamic settings on the surface, marked by precision and abstraction, and the hidden ships in many of his pictures are metaphors for energy and departure.”

Prof. Ulrich Gansert (Professor at the Academy of Fine Arts in Vienna, Austria)