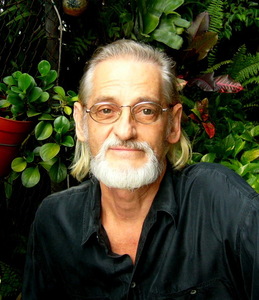 Midelti was born in 1936 in Midelt, Morocco, town from which he has drawn his artist's name.
Studied philosophy at the Sorbonne, Paris.
Midelti started painting very early in his life, later under the guidance of Marcelle Billaudot, former director of the Galerie Synthese, Paris.
Moved to Jakarta, Indonesia in 1968.
Married to Rochana, they have five children and five grandchildren.

Paintings/water colours of Midelti can be seen in the publication 'Adam and His Children' ,Starlight Press, Sydney, 1992