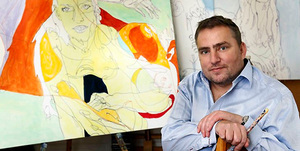 „My aim was to create allegoric painting and abstract lyricism. This is LEA, Lyrical Expressive Allegory, the painting of sensitivity. The unhindered reflection of contours and colours to the world………
This used to be the battle of my own style, which formed the cornerstone. But now, illegality and persecution cast their shadow as I am getting older, because my reflections change and are delicate: poverty, orphans, political destiny, social responsibility, national - cultural values, equality and belief in the people. This is the sole and universal message: Mankind is liberating!”

As a child, I was influenced by my actor father’s contemporary painter friends, I draw and paint since then. These were the famous eighties. As I youngster I was greatly influenced by the painters of Győr such as Tóvári Tóth István and Barabás László and naturally the new wave and the style from the West.

I work as a spinal surgeon and while at medical school I became a painter scholar in Paris in 1994, and wanted to stay. My paintings were exhibited in Mednyánszky Gallery from 1998 in Budapest and I have regular exhibits in the Art Ten Gallery.

I had several milestones during my artistic career: we founded the Figurative Attack Project and Performance together with other young artists in 2000, which emphasised the lagging behind of the national „modern” art. In 2001 I became closely acquainted with Endre Szász’s work, a Hungarian painter-graphic artist and his professional technique enthralled me. Later, his widow who used to be his manager, Lula Szász discovered my work and this paved my career further on.

My first solo exhibit was in 2004 in the Stefánia Gallery (Budapest, Hungary), and then together with other artists in Balatonlelle. Together with Endre Szász we exhibited in 2010 in Sopron, in 2012 Ajka and Miskolc (The Night of the Arts).