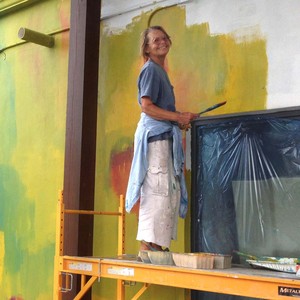 Janet Margaret Mueller was born in Champaign, IL. She has a Bachelor of Science in Marketing, College of Commerce from the University of Illinois, 1975. From 1977 to 1984, Janet worked at a television station, writing and producing commercials. Later, she freelanced as a graphic designer and illustrator, as well as a producer of advertisements in TV and print. She was nominated for 30 awards for creativity during those years, winning 11, including a Best of Show for a direct mail piece for the University of Illinois Assembly Hall.

Janet also painted on fabric and designed clothing. In 1990, she was commissioned by Spiegel to create 900 hand-painted caftans plus 1000 signed serigraphs of her fashion illustrations. These were featured on page 5 of their Christmas catalog. Janet Mueller then focused on her future as a painter of fine art.

Janet Mueller had 12 solo exhibits and participated in numerous group shows in Key West, Miami, Chicago, New York City and Lexington, KY. In 2001 she was invited to show her collection of paintings in Rome, Italy at the Centro per L'Assistenza Sociale e Culturale.

She was selected as the alternate artist to design the terrazzo floor of the Aventura Arts and Culture Center, Aventura, FL in September 2009 by Miami-Dade Art in Public Places, Miami-Dade County Department of Cultural Affairs.

In 2013, Janet was chosen by the Fine Arts Commission of Miami Shores to show both her paintings and sculptures in the Village Hall Gallery throughout 2014.

In that year, she was also selected to paint a 90 foot mural on the courtyard wall of R House, a restaurant/gallery in Wynwood. Through White Porch Gallery @ R House, Janet's paintings and sculptures were exhibited inside the gallery area throughout the summer of 2014.

In 2015, Mueller participated in a juried exhibition, "The Writing on the Wall" at The Painting Center in New York City and in 2 shows in California. Janet is included in the Painting Center's artist registry.

“ TASTE OF HUNGER and SCRUFFY”

A TASTE OF HUNGER is a piece about beggars on the street.
There is a video screen inside the bucket. The video shows coins dropping into the bucket along with rain drops.
The character stands with his dog, SCRUFFY. The dog's head is a bicycle seat. His heart, a bike light, blinks with love.