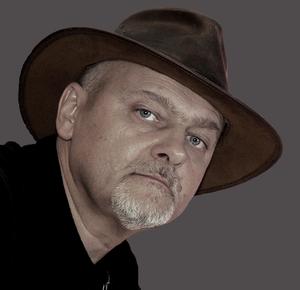 Drazen Pavlovic is a master painter and pioneer and co-founder of a new art movement (see below). He Lives and works in Varazdin, where he has an art studio called "Atelier Pavlowich." He is member of the Art Association Varazdin ( LUV Varazdin ) and Croatian Association of Artists ( HDLU Zagreb ). He is the chairman of the Managing Board of LUV and guide of the LUV Gallery in Varazdin.
Pavlovic was born on 17th May 1962 in Varazdin, Croatia (EU), where he finished primary school and high school. From his early youth, Pavlovic's attention and effort were occupied with painting.
He earned his fine arts education from teachers B.A. Ruzica Grgevcic, and later from B.A. Mirjana Ducakijevic, who taught him about knowledge and beauty of the history of fine arts, (the art of painting). From that time onward, his orientation towards painting was determined.
In 1990 Pavlovic attended "LC Zagreb“, where he studied in the class of the academic painter B.A. Nela Gruden, learning and improving his art techniques, delving deeper into the technology of painting. From 1995 onward he has worked as a professional artist.
Drazen Pavlovic has given 33 solo exhibitions with his 'cycles': "Vievs“, "Landscape", "Nude Act2", "Psychodelic“, "Entelechy“, "Vision", "Micro My World", "Prediction of New Trackings", and "Sphere". He has also participated in 150 appearances on group exhibitions in Croatia and abroad (Slovenia, Italy, Austria, Hungary, Germany, Macedonia, Bosnia and Hercegovina.
Pavlovic founded the famous painting colony "Julijana E Draskowich“ in Trakoscan (1989 – 1999) in Croatia. He took part in number of humanitarian actions and auctions and in some of them he was organizer. For his art (and humanitarian) work he has won several valuable prizes, such as : * "Golden Palette" 2007th ; government of Brcko DC BiH * "GrandPrix PaletaFest" 2008th & 2009th ; Varazdin,Croatia * "First Prize of 52th GI LUV" 2010th ; Varazdin, Croatia * "Emerging Artist of The Continent Europe" WAC , New Delhi, India * "Winner - First Place Contemporary" 2011th ; Artscanyon Gallery, LA, US * "Art Takes Times Square" 2012th ; Artists Wanted, NYC, US * "Winner of the IVAC - category abstract" 2012th ; IVAC, Rockford, Ilinois, US.
Recently, Pavlovic has begun to work together with the Artist ~ Neuroscientist David Engstrøm on a new art movement called "The Metastabilian Movement". The vision, concepts, method and criticism of this art movement are based on an appreciation, respect and inspiration for 'the complementary nature'.
The philosophy of this movement is grounded in the newer science of Coordination called "Coordination Dynamics", pioneered by the eminent neuroscientist J. A. Scott Kelso. Both Pavlovic and Engstrøm see an exciting opening terrain for creativity and discovery in this movement. In that spirit have both dubbed themselves "Metastabilian Artists" or "Metastabilians".

PAVLOWICH hasn't uploaded any images yet. Please check back soon!