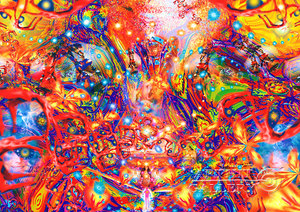 I've been drawing since I could remember.
Finished Roerich school. Worked as an artist-designer. Then graduated from the technological institute.
Started as a graphic artist, the first artworks appeared in 1991. Since that time I have created about 200-300 graphical works in ?4 format. There are also oil paintings.
Since 1995 I tried to draw on a computer. My painting style varied from year to year.

Now I have discovered, and to put it more precisely I was given this opportunity to discover the new style in painting. I defined it as the Space Electric Surrealism, (SES), this is an alliance of a person's creativity and the opportunity of computer software. The mutual creativity of a computer and a person. Running a few steps forward I can say that it is impossible to draw my objects manually nor to create my pictures in another way! One work has up to five stages of development, beginning from a pencil sketch and up to the dramatic changes at its latest stage. The computer suggests, and I choose. I can repeat my works in oils, but I see no need to do it as it'll take too much time.

EACH WORK IS UNIQUE
AND CAN'T BE REPEATED

To repeat the artwork means to lose the chance to search the better and new artistic style. So the idea of my works is to search, alter and improve new artistic style which comes during the process of connection of creative opportunities of a person and a machine. You may say that such artworks could be produced in any amount, and you'll be right. But I think there is no point in deceiving myself.
The most interesting aspect that also attracts me in this creative impulse is the creation of completely New in the fine arts. To give a new vector to the development of painting!

Creavity and works of Dmitry Stepanoff are very strikingly and they have all characteristics which distinguish the real art because they have their own aesthetics and individuality. Every Stepanoff's experiment is a improvisation of color and light that completed the way to new harmony gives to viewers new emotions and associations.

We know that at the beginning of 90 th years of XX century Stepanoff started to paint some small graphic pictures. On the one of his early pictures with the image of woman head he shows us he is an excellent drawer. In this picture made by pencil he creates also a character of woman, her femininity. In his early works we can find some ornamental and abstract cycles. Pictures of these cycles are spontaneous as other Stepanoff's pictures also are. But Stepanoff added to ornamental and abstract pictures a Color. We have to note that in this period of creavity Stepanov draw pictures by oil-based paint also.

Now Dmitry Stepanoff is a outstanding colourist who found a his own way through the multicolor field of Russian art. Since 1995 Stepanoff has drawn pictures using PC with graphic programs.

After creating of some paint cycles he declared arising a new art style to which Stepanoff gave a name “Cosmic & Electric Surrealism” (CES). Stepanoff says that “CES is combination of human creavity and possibilities of computer”. But that definition is of course relative. There are of course some cosmic elements in Stepanoff's art. Painter creates new cosmic worlds by his drawing. In these worlds there is new system of forms which is fantastic and irrational. Now Stepanoff is near astral part of reality which has borders with two worlds – the physical world and the fiery world of thoughts. Astral world has millions of colors and tinges but has not protons, electrons and other fractions. Rudolf Steiner and Charles Ledbitter were writing about this world.

Stepanoff's works are two types: some pictures are dynamic and others are static enough. His astral colors always are moving. We should look to his picture “Flash of tune” which is created with moving colors, duality, mental forms which are united by transparent shadows of meanings. We can see in this picture some fantastic beings from our dreams, exotic fishes and other bright and strange objects.

Well, moving of colors, their dynamics can have some electric nature. People use electricity in their daily life for very long time. When Stepanoff says that his style is “electric” this phrase has figurative meaning. Stepanoff can show his pictures by PC monitor and in this case they would have more moving. I think that when you see Stepanoff's art you have to listen tracks of rock band of 1970 th “Electric Light Orchestra”.

Both in music and in painting must be harmony, beauty of colors, of mental and physical forms, of rhythms… But we must say some words about surreal of Stepanoff's art style. In his early works we can see all typical forms and characteristics of surrealism, for example the ghost of bird or eye-snail. In surrealism subjects and objects are linked each other, surreal forms don't have defined meanings or defined colors. Sometimes painters of surrealism extract objects from nature world, but not always. In Stepanoff's art we can see paradoxicality in colors, in meanings and in objects… But he has not a purpose to deform colors and forms, objects and figures. But surrealists are people who like changing forms and objects. But we can say that surrealism as a style finished at the end of 20 th century and now we can see only followers of this style. So, Stepanoff can give a name of his art style “Cosmic & Electric Neosurrealism”. I think it would be more right.

Surrealism of Stepanoff has its origin in dreams. For example, we can look to his picture “Fire and eternity”. In this picture we see a human hand which appears from blue background. Everybody can decide what does it mean? As a meaning of sacral texts depends of the questions which reader wants to ask to these texts, the meaning of pictures depends of mental state of viewer and can find the harmony in human soul. So, Stepanoff's art is a key which open some spiritual doors.

Surrealism of Stepanoff has its origin in dreams. For example, we can look to his picture “Fire and eternity”. In this picture we see a human hand which appears from blue background. Everybody can decide what does it mean? As a meaning of sacral texts depends of the questions which reader wants to ask to these texts, the meaning of pictures depends of mental state of viewer and can find the harmony in human soul. So, Stepanoff's art is a key which open some spiritual doors.

Stepanoff's pictures have not only cosmic elements but elements of amalgamation too. In his “Occurrence of consciousness” we can see the anatomy of lightning (or thunder). There are more cosmic elements in this picture than in others. Dynamics of this work arises in moving of colors.

Russia is a country of conservative art. In contemporary Russian painting we can see the influence of art tradition of 19 th century, foe example of academic realism. At the end of 20 th century painters started to get photo of their works and to edit them by PC. Well, many painters started to do this – V. Krotov, V. Pronin and others. Stepanoff not only takes photos of his works but he always develops his sketches by graphic software noting all changes. But PC – is an instrument, a method which multiplies possibilities but not a coauthor. To make pictures this way as a feature of art method of 21th century which Stepanoff belongs to.

“A mirror for the hero Right part of Triptych”

“Fight for a fish”

“Fight for a fish”

“t will be compressed now”

“Sight of the woman”

“Four parties of the World”

“The person and Consciousness”

“Swords the lightnings in death (Abracadabra)”

“The world of Angels”

“THE WORLDS OF DNA”