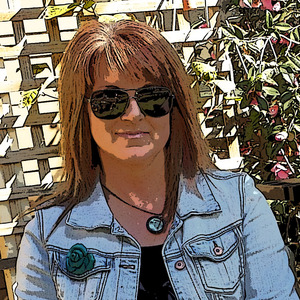 I was born in the suburb of Oakleigh in Melbourne, Victoria, Australia and I currently live in rural Gippsland, Victoria where I work from my home studio creating urban landscapes and street scenes. I returned to study in 2006 and obtained Certificate 1V in Visual Arts and Diploma of Art with high distinctions and credits.
I work primarily in acrylics on canvas but I also incorporate charcoal, pastel, oils and collage into my works.
My main focus is the inner city and surrounding suburbs; laneways, railway stations, pubs, cafés and dilapidated buildings are among my favourite subjects which all reflect my passion for the urban environment and the local music scene.
I have held a number of solo exhibitions and I also participate regularly in group exhibitions throughout Australia; I have been shortlisted for several art prizes throughout Australia including the Fleurieu Art Prize in South Australia, The Hornsby Art Prize in NSW and the Flanagan Art Prize and Archangel Art Prize in Victoria.
I was recently awarded 5th place in the painting category in the Light Space & Time Online Gallery CityScapes competition in Florida USA and I have completed a number of private commissions.
Recent solo exhibitions include From Place To Place, West Gippsland Arts Centre, Warragul (2016), Beyond The Facade, Little Woods Gallery Colingwood (2015), Facade, Marios Café Fitzroy (2015), As I See It, Burrinja Café Gallery Upwey, (2014), Urban Blend, Marios Café, Fitzroy (2013), Banc Cafe Docklands (2013) Urban Detail, Tacit Contemporary Art Abbotsford, (2013), Urban Mix" Marios Café, Fitzroy (2012)

My Urban Landscape body of work is focused on Melbourne and surrounding suburbs in Victoria, Australia where I grew up. I relate strongly to the urban scene which is still very much a part of my life. Although I currently live in the country where I work from the peaceful surrounds of my home studio, I am drawn back to my early years of growing up in Melbourne and I find the ever changing urban landscape of great interest. The city and inner suburbs provide me with endless source material and I frequently travel between the city and my rural home looking for inspiration. Recently I have found inspiration closer to home, exploring my local area and uncovering many interesting structures and subjects. The music scene is also a recurring theme throughout my work and my main objective is to capture the feel of a particular place or venue; anywhere that is visually appealing or holds a particular memory. I am constantly looking for the hidden beauty beyond the facade; pubs, cafes, shopfronts, decrepit buildings, laneways and railway stations are some of my favourite subjects. I aim to represent the rhythm of the city and the gritty feel of the street, to give the viewer an insight into that space whilst also providing a narrative. My preferred medium is acrylic on canvas but I also incorporate charcoal, pastel, collage and oils in my work. My website can be found at: www.paulinebaileyart.com/

Jerry's Milkbar is part of my urban landscape series and features a Milkbar/Cage in the Melbourne suburb of Elwood. 76 x 91cm, Mixed media on canvas.

Temple Town is a barber shop on Johnston St. in Abbotsford, Melbourne, Victoria and is part of my current Urban Landscape series. Mixed media on canvas, 61 x 76cm.

The Tote - Reborn is part of a series of urban studies and street scenes which make up my most recent body of work.

Currently working from my studio in rural Gippsland, Victoria, but born in Melbourne, the urban environment is of particular interest to me and I enjoy creating strong visual images that also have a narrative.

The iconic Tote Hotel in Collingwood has a strong relationship with the Melbourne music landscape and to me it represents the city's strong music culture. It came to the forefront in 2010 when more than 10,000 people signed petitions and marched through the city to protest about the venue's closure a week earlier due to high financial costs associated with aspects of the liquor licensing laws. The rally sparked political and public debate and resulted in amendments to the liquor licensing laws and also led to the subsequent reopening and regeneration of the Tote. Mixed media on canvas, 61 x 51cm

I saw the Gospel Chapel while passing through the town of Childers on a recent road trip to Queensland and thought it was an interesting building with a lot of character. 40 x 30cm, acrylic on canvas.

The Bank Vault is a building in the historical gold mining town of Walhalla in country Victoria. 40 x 50cm, mixed media on canvas.

Rose Cabin is a building in the historical gold mining town of Walhalla in country Victoria. 40 x 50cm, mixed media on canvas.

Chopsticks - Maffra is a Chinese restaurant in the small Gippsland town of Maffra in Victoria. Acrylic on canvas, 61 x 61cm.