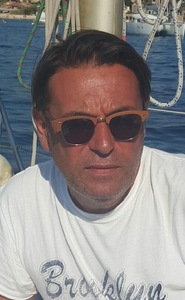 “Art is in the street,” says French artist nosmaS, “and it is available to anyone who will pay attention.” A fan of the graf ti artists and “taggers” whose work adorns the surfaces of many urban buildings, nosmaS, who has worked in both media and the graphic arts, was inspired to become a hunter of the posters and images created by those renegade artists. The artist’s goal is to recompose those images in his paintings while maintaining a respect for the unity of the spaces in which
they were found.
He succeeds brilliantly in this delicate task. His images could at rst perhaps mistaken for those found pasted up in alleyways, but a closer look reveals a consistent eye behind the artist’s re-compositions. Faces or cityscapes will be taken apart and reassembled in a way that brings the great poster artists of the 1920s and ‘30s to mind. An extremely sharp eye for color is also in evidence, with areas of bright reds, oranges or blues dramatically placed against black and white imagery. There is a constant back-and-forth between the different layers in these images, but the contrasts are always carefully balanced, and the resulting works capture the energy and essence of the street culture from which they spring while also expressing the artist’s own precision and personality.

Art is in the Street by nosmaS