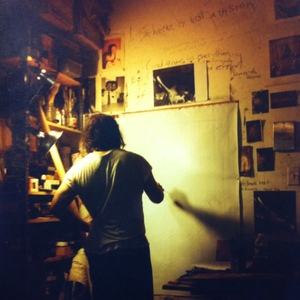 The earliest memories I have are of drawing when I was 3 years old. Although I was granted early acceptance to Pratt Institute at age 17, I consider myself a self-taught artist. My most exciting discoveries were not made under the tutelage of a teacher or professor, but rather by working countless hours, independently, with a need to explore the possibilities of drawing. The notion that the possibilities are limitless, is the same notion which frees me as an artist and as a human being. It’s the thought that the meaning of one’s journey is not its destination, but rather that one is not attainable because one is not knowable. When an end is implied the journey ends, as does the growth and the possibility of further growth. To keep moving is to explore, and to stay in motion is freedom.

Paper has been a cornerstone of my art for as long as I could pick up a pencil. Painting came later, as it intimidated me a bit because when I was 10, I thought there was a particular technique I needed to learn. I thought to myself, I don’t have any recourse to learn this technical tradition, I soon just said to myself I’ll put brush to canvas or any surface I could get ahold of, and let the “happy accidents begin". Eventually I realized technique is important, but then you have to let it go, as with any other medium. For me growth happens by experimentation. Essentially allowing yourself, and having the courage to not adhere to any rules. Its only through freedom that one will find their “voice.”

The foundation of my work lies within my two earliest passions, draftsmanship (the limitless possibilities of conveying form with ANY medium). The second, is to keep moving closer to the purity of touch. NOW more than ever, my efforts have focused on searching, and moving deeper than external representational rendering of a face, but to evoke the humanity, the inner emotions, and psychology which binds us all as people. Since then I have been exploring and testing what paper, and other surfaces can do. The essence of my work has been to evoke the idea that even the most universal yet, personal states of being, can be also as personal as everyone’s unique journey. Probably why instinctively I need to explore and see farther, through the connection human touch reveals.

Currently, I have been working on a series called “Aspects.”  It could be called a series of "self-portraits.” Actually, the idea is for each piece not to be a representational rendering of myself, but endless states of mind, emotion, and psychology which is universal to everyone. I just happen to be my most accessible reference point. The piece in the series called, "Looking Inside Out," was intended to evoke how a person needs to examine oneself in order to find out truths that can't be revealed by looking outward, but looking inward at our own unique journey in life. Then you can perceive, and understand the seen and tangible world much more clearly by understanding yourself in this world.

My work process is what I feel threads and integrates my work to a cohesive end. For several years now I have been viscerally developing an unusual way of using paper. or any surface. My way of working has become as much about the touch and feel of the paper, or whatever surface I am working on, as what I will conjure on the page. I have been using my fingerprints to build with marks, this is inspired by the way children finger-paint. Kids find their way by means of uninhibited touch to explore, it’s a beautifully organic and unselfconscious process to watch. In my “in-progress series Aspects,” I have been using materials which lend themselves to “the touch of my hands,” powdered graphite, pure paint pigments, Inks, graphite chunks, pencils…even involving spilled coffee or O.J. is interesting to me. I am excited to see what other mediums and tools I’ll use. It’s becoming a liberating journey.
www.andrewgalindoart.com

““Feeling it All, Thinking of Rembrandt"”

““Between Looking and Understanding, is Seeing"”