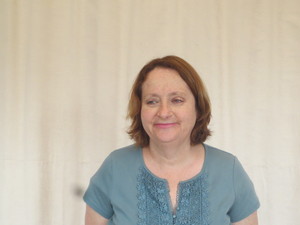 Michaela grew up in Mosman a harbour suburb in Sydney New South Wales. Michaela completed an art Certificate at Seaforth Technical College. She then did an Art Diploma at Alexander Mackie College.

She has held a solo exhibition in a cafe in Newtown in 2001. For many years she was part of the Bradling Life drawing group
From 2010 she moved to Auburn and became part of the Artist Network there. Exhibiting with the group and individually in the Auburn Mayor Art Awards. She was awasrded Highly Commended in 2015.
Micheala held a solo exhibition called "finding my way" in the foyer of Holyroyd Council .2015
Her works hang in cafes and was used as a centre piece in the Mega Shopping Mall on Parrammatta Rd.

The writing was on the door

This is a portrait of Councillor George Campbel. He was brave enough to push for an inquiry into the coucil. He would often use the phrase the writing was on the wall when interviewed by the media. This painting also referred to 500 years ago when Martin Luther was courageous enough to put a notice on the the church door stating the corruption..

“The writing is on the door”