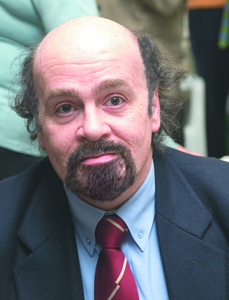 Graziano Ferrari was born in Milan in 1958. His predisposition to drawing and painting is revealed early, but before it can become passion and become a craft will pass many years. His inner anxiety pushes him to an experiment without constraints, spanning in every direction leads to the extravagance of the moment. The materials are the most varied and its horizon widens even in sculpture. In the early 1980s he began to attend the studies of some painters from whom he received valuable lessons and technical elements that he used to supplement his research. The first exhibition (1981) introduces him to an unknown world and substantially different from the one idealized in the fantasies of youth; Expectations are disappointed, but in return gets the chance to deal with other artists looking for their own way. During this period there are some sodalizations, some of which last up until today. In 1988, in collaboration with two other painters, he founded a group named Europio, intending to become an artistic research station (referring to those scientific outposts exploring new worlds). This experience will make a big contribution to the definition of a personal style tending to more and more abstract forms to reach the informal. In 94, when the artistic association was dissolved, he resumed the series of exhibitions that led him to be present in many national and international galleries. Between 2009 and 2010, a growing dissatisfaction, a passion for personal stories, crushes its artistic system. As long as he starts from the study of pictorial techniques of the past, focusing attention on the divisionism of Seurat and Signac. From the synergy between the Divisionism and the Informal, a new trend is born that he calls "non-projective divisionism". In 2014 he was appointed President of the Italian Encyclopaedia of Art, which is still in charge.

In this gallery some of my works are collections ranging from 2014 to 2016.

“ Appearing on the surface of the substrate”

“The hidden charm of the emotional fury”

“The temporary moment of happiness”

“In the first flowering of his deceptions”

“The perception of time”