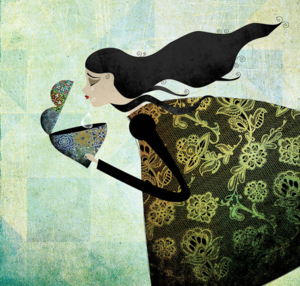 "I want to touch people with intensity and emotive compositions, and if its possible, to make them smile "

Fatinha Ramos is a Antwerp-based illustrator and visual artist originally from Portugal.
After her graduation as a Graphic Designer in Porto, she moved to Belgium. That's where she started her professional career as an Art Director in Advertisement agencies. Working for national campaigns, she developed a strong capacity to analyse and visualise abstract concepts. After twelve years, she made a switch on her carrer in order to follow the old dream of becoming a full-time illustrator, and to work on different artistic projects.

Open-minded and full of creative somersaults, she tears down all the classic conventions avoiding the dangerous pitfalls of clichés. Instead, she takes us on a journey through her poetic imaginary world of singular textures and rich color pallet. Her strong conceptual artistic illustrations and her surreal compositions create an emotive, fascinating and unique universe that transcends borders.

Answering the call from several international magazines, she has opened the door to her fantasy realm. Fatinha has worked her magic on books, covers, posters, press articles, advertising, animation, children’s and pedagogical illustrations and diverse personal projects.

Welcome to the wondrous world of Fatinha.

Illustrations for the solo exhibition Unbreakable. Based on life experiences, I try to show the contrast between the fragility and strength of my (un)breakable life.

Illustrations for the solo exhibition Unbreakable. Based on life experiences, I try to show the contrast between the fragility and strength of my (un)breakable life.

Illustration for group exhibition in Porto with the theme Portugal illustrated.

Saudade is the only Portuguese word without translation.
It´s the feeling of missing someone so hard, that the pain goes deep into the soul.
Saudade is a deep sadness and emptiness , a void that can only be filled with memories.

The beauty of the imperfection.

Article entitled "The Silent Grief of the Yazidi Women", about women who are captured; tortured; raped; sold and enslaved by the Islamic State of Iraq and Syria (ISIS).
The Yazidi, are a minority group whose faith the jihadists consider heretical. The Peacock (Melek Taus) is the symbol of Yazidi religion.

"Flower of Solitude", by Xiaolu Guo.
The story is about three characters that are somehow linked: HOUYI; CHANG’E and WU GANG. CHANG’E was a flower picker in the king’s palace and on the earth. Her job is picking up the blossom before it falls. She´s very lonely and her wish is to be immortal. WU GANG is the guard the heavenly gate doors for immortality is in love for her and misses the planet earth. HOUYI the archer, is married with CHANG’E and he doesn't really care about her. All of them are very lonely.

Illustration for a collection of fables published in Portugal, by Porto Editora.

Illustration for a collection of fables published in Portugal, by Porto Editora.