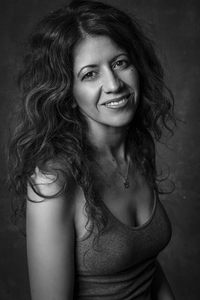 Gaby Messina (b. 1971) is a visual artist, works with photography portraits, video art, documental and experimental films. Based in Buenos Aires. She worked in the advertising field for several years until she began to develop her own language of production through photography and video.

Messina portrays, registers and tells the story of people’s lives and accesses their intimacy by establishing deep personal bonds. Her work seeks to enter the psychological realm where questions arise about human existence.

She has special edition publications on her Series, Grand Woman, Soul Mates, Lima Kilometer 100, Faith, Maestros. The forest and the tree. She has received several awards for her production. Her work is in the collections MALBA, Latin American Museum, MNBA National Fine Art Museum, MAMBA Modern Art Museum from Buenos Aires, Argentina.

MAESTROS. THE FOREST AND THE TREE

The maestros portrayed by Gaby Messina invariably look at the camera. That means, they look at who is looking at them. At first, and in all cases, they look at the photographer, who has allegedly asked them programmatically that they do so. And they simultaneously look at us knowing that every portrait is an invitation to know something about the portrayed, and they seem to surrender meekly to this delicate inquisition. Also, and as every picture implies necessarily knowing something about the artist that portrays it, Messina reveals herself discreetly, restrained, with the intention to enter their privacy without invading it, as if being guided by the intuition of surgical acuity in the descriptive, documentary intention, will make her more effective and reliable, the more prudent her approach to such an unknown yet famous character. Perhaps this impression arises from the distance she chooses to place between the camera and the object, so wary of excessive proximity as is demonstrated in the adoption of the mid-plane, wide enough to allow for the necessary space to exercise its narrative power. The body gestures seem formal using classic studio poses, and here the word studio acquires triple significance, as if Messina had conceived the studio space - workshop - housing according to the scenic rhetoric of the photo studio, as a more scientific way, of precisely studying and sensitively scrutinizing the data that are presented in each case.

However, the succinct domesticity of the portrayed, as well as their good posture, their physiognomic features, and their modest gestures are exhibited under a neutral, balanced eye, not presuming to take any typical mystery from mythology that would make the studios and workshops a magical, secret and enigmatic place. We are not here to discover anything spectacular, or to confirm or deny a possible relationship between the scenes of the art pieces and the scenarios of their lives. There where we could boast that disorder, neglect, overcrowding or even discomfort would prevail due to the always well weighted, alleged paroxysm of creation, everything looks tidy and crisp accommodated to the extent of obsessiveness. Here, the exhibited clarity is more important than the myth. Messina’s characterological documents, test the mechanics of detection in the serenity and even circumspection, in some unexpectedly serious rictus, in the sometimes mischievous, sometimes complicit smiles, in any searching or interpolative look, and not in any allegedly revealing accumulation of data, or in any eccentric overacting.

However, as the cleansing without artifices of the environment is decisive and important towards the most truthful contact possible with the idiosyncrasy sought, detected or even guessed, Messina has strongly intervened in the transformation of the luminous atmosphere that covers and tints the spaces, areas and objects, as if they had required certain whimsical theatricality, an autonomous, affecting the eventual emergence and priming of natural light with sparkles, glows and hues of an arbitrary chromaticity, so that the temperature of light not only enables material visibility of concrete elements, but also injects metaphors, assumptions, impressions, conjectures.

At the same time, under the effulgence of fic