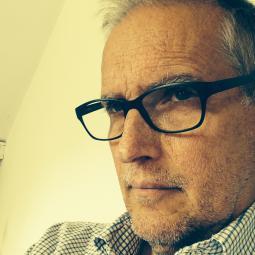 have a rough idea of what I want to do before starting a panting.
I don't follow a precise trace. there is nothing intentional, rather the search of paths hidden in the surface.
I am fascinated by seriality, the repetitiveness and the precious small mistakes that open up to new
unexpected prospectives.
my work is informal, non objectual but vital. I like the gesture, and the sign that it leaves behind but at the
ame time I try to avoid gesture whenever I can.
I keep notes that remain untouched for long periods of time; some take shape and develop, some other
remain confined in small notebook waiting for their moment to arrive.
my painting is concrete and concentrates on the relation between color, space and time. watercolor is
the media of choice at present: it is fast, transparent and allows multiple chromaticism. it requires
concentration and sufficient distance to let happen those incidents, not guided but followed that lead
to the finished painting.

paper is the support I prefer, specially when it carries traces of the human work.

illness has certainly played an important role in my work. it forced me to refine my language,
leading me to choose a vital and positive approach to contrast the perspective of the absence of future.

future is an idea that I pursue with no rush in the time present, in it's suspended concreteness.

STIMMUNG / MOOD.
works on paper.
2016
I reject the negative which is normally associated with the black color. I think that , more than white, it represents a space where gesture frees itself from any restraint or inhibition and fills, or empties depending on the circumstances, the distance between the real world and the one of the art piece: it is the transit between the darkness of oblivion and life. For this reason it cannot be conceived other than a positive force after the silence of the soul. What is more silence is a necessary step to reach a different level of experience, to enter an infinite conceptual space.
Black is perceived as a bad omen, it is connected with mourning. wrongdoing, secret, to the feeling of a dark side, to censorship, to radical and insurmountable contrast. It is an absorbing whole, a transition without echoes. In fairness it is not different from the other colors, rather it is the only one that allows one to work with its various tints, without falling into pastel tones. Tint is more direct than tone, it is stronger than the same color, it allows for more incisiveness, more clarity and at the same time lets one discover new perspectives.
To be conscious of following a path that does not have a beginning or an end. To accept accidents as precious elements and fundamental elements to the making of a project that knows no limits.
It is about compositions entirely based on the use of primary elements: there are audacious depths in a monochrome sheet of paper, apertures on fantastic thin geographies in which one has to let be lead from the paper itself, guided by a new network of points of reference, to be able to feel the extension and sense its vastness: sign, tint, the physicality of color are the scaffoldings on which the creative process that, settling, takes the work to its completion.
Removing color after having laid it is some sort of reverse printing with a similar intent and result. Working on pigment with the aim of letting speak the color that is left anchored to the paper or that detaches from it. The result is that of identifying the new dimension turn real into the track of texture and the casual gesture of man in the act of making.
My painting wants to eliminate any coloristic reference, blast the palette in favor of a single color, totalizing and catalyst, black, which appears in a series of different colors only in relation to the amount of pigment that remains on the bottom surface at the pressure that it raises or leaves it, the only concrete action. The rest develops on the plane of ideas, exists only in thought; In this is a conceptual art, a score of light-not light, full-not full, timeless. Its uniqueness and the coexistence of two elaboration models: one almost sculptural, take off color, almost print, repetition as much as possible of the same compositional and formal theme. It's a purely tragic, overwhelming painting that does not offer a scam. It is the fist of a space full of deep void, the prologue of a terrible solution. It's a dark pause in silence.

The choice of a medium such as paper is essential to allow the whole piece to find again the humility and honesty of a scratch quickly left to elaborate later
The journey proceeds in different times and ways, and at the same time unique, as reflecting the unrepeatable characteristic of human experience. Every moment is unicum, does not rest, does not return, is definitive. Every moment stands out for its intrinsic completeness: every moment is completed only at the next instant. From here comes the feeling of nostalgia (Russian: ностальгия) of a near past, a place of certainty. So the nostalgia of a color that was there and that it is no longer, of a vacuum that has been filled, of the freedom of a concept lost in its concrete becoming. In this feeling of lack, a state of mind grows, which, if it was to limit the distance from the past, would be the prologue at the end. If, however, through distance and past, leads to the awareness of the present, dilate the space of the work; allows it to exist in a suspended time that we are asked to access to allow it to radiate its power that connects us to it, to make us find new references that will replace those that have always guided us. A power that emanates, even if it is not harvested. So that contempt of the arts, just as the appreciation, is the symbol of its valence, which works on men like it or not, accepted positively or negatively.

Emotion, either irritation or pleasure, is the tangible evidence of the work of an art piece. Various interpretations blossom at this point on the opportunity of a scope for art, or about its independence from a specific meaning; to want an art that ”signifies” meets the prerogative need of the viewer that does not concede to the conceptual limbo where any characteristic note becomes its opposite or presents countless alternatives.
Color follows the paper and let itself be guided through the labyrinth of its texture; black makes for a more incisive path. Dark shadows exalt the roughness of the background and force us to a low flight that enters the thin space settled between fields layered or removed.
The experience of a work of art is all in the reader's willingness to let go of the discovery of a new dimension of perception, to cross the thresholds that we see but that we do not dare to cross.
Art, any kind of art is the liberation from subjection to the banality of our everyday life; banality no longer understood as negative quality but as an essential part of our moods.

Stimmung (K. Stockhausen, 1968)
“Stimmung” (intonation) is a composition for amplified voice characterized by a mathematical strictness as far as the musical elements are concerned and total freedom in the choice of the spoken content.. Namely, while S. fixes rigorously tone, harmonics and rhythm of the 51 moments, singers are free to use words of their choice. Similarly to Feldman way that, while he indicates the tonalities to be utilized through graphic symbols rather than musical scores, lets the player the choice of the length of the notes, for as long as he can hold it. In this way every performance becomes a unique event, unrepeatable.

Striking contrasts; the one between the calm and primitive harmony of the composition and the revolutionary howl shouted from the barricades all over Europe. Then the one with the incumbent theme of serial the repetition of content and banal gesture which breaks into the making of the art at the time and that will impress a fundamental turn in the way we perceive and live an artistic journey.