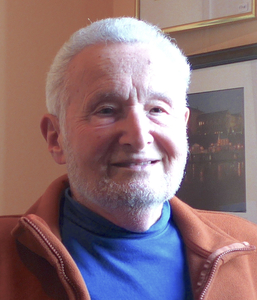 ARTHUR OSTROFF
was born in Philadelphia and has a BFA in from Carnegie Mellon
University in Pittsburgh. A global traveler, his journeys began in the
U.S. Army, which took him to Korea and Japan.
Later travels took him to Europe. He lived in Amsterdam, Brussels,Rome and Prague, working in graphic design, art and illustration, audio visual production and design management.
Ostroff has exhibited in Belgium, Holland, Italy, France, England,
the Czech Republic, Canada and the U.S. His work is in collections
in Europe, North America, Australia, New Zealand and Japan.
In Philadelphia, his work has been shown at the Hahn Gallery,
The Newman Galleries, the Philadelphia Museum of Art, as well
as juried and invitational shows throughout the region.
Among his awards are a Medaille d’Argent at the Grand Prix
Concurs in France, Best in Show at the Scenes of the Schuylkill
exhibition in Pottstown, PA, the Bertha M. Goldberg award at
the PAFA Fellowship show, and First Prize Gold Medal at the
Da Vinci Art Alliance Members Show.
An active participant in the Philadelphia region, he is a
former board member of The Plastic Club, Da Vinci Art Alliance
and the Philadelphia Sketch Club.

This sampling gives a good overview of the kind of work I do.

“A random sampling of my work”