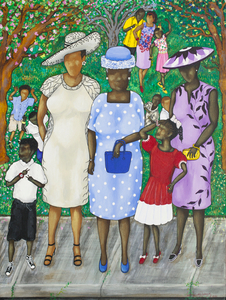 Self-taught artist, and have had several solo shows and one residency at Rutgers Center for Print and Paper in 2005. During my residency I worked with the Master Printer and together we created “The Get Together” an adaptation of my original painting “Chit Chat and Apple Martini’s.” The result of the Rutgers residency is a work entitled “The Get Together” which was acquired by the Library of Congress in 2006 and is in the collections of nine museums around the state of New Jersey. My piece “Too Many Cooks” was published in “Looking Out, Looking In” an interpersonal textbook by Adler/Proctor/Towne. In addition, Pomegranate Press has published note cards using four images of my work.
In 2011 I exhibited eighteen pieces of work at the Charles A. Wright African American History Museum in Detroit. September 2012, the University Health Systems of San Antonio purchased seven works for their new downtown facility. 2015 commissioned work installed in The Freeman Coliseum, San Antonio, Texas.

Rutgers Center for Innovative Print and Paper 2005, Artist in Residence

I CAN SEE CHINA

“I CAN SEE CHINA”

“TOO THE MOON AND BACK BEFORE SLEEPY TIME”