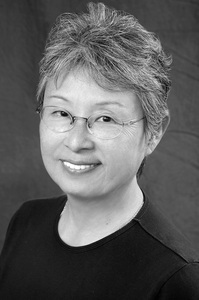 Hiroko Yoshimoto was born and raised in Japan and moved to Los Angeles as a teen. She received her US citizenship in 1977. She has BA and MA degrees in Art from UCLA. She exhibits actively in California, Tokyo and New York and is a retired studio art instructor at Ventura College.

She was the featured solo artist for Ventura Chamber Music Festival in 1996 and the Visual Art Curator for VCMF Art Exhibitions in 1998. She designed the stage set and costumes for the opera “Magic Flute” for Ventura College opera production in 1990. She designed the stage sets for “Unicorn” production by Ventura County Master Chorale in 1991 and for “L’histoire du Soldat” for Ventura Chamber Music Festival in 2000. She was a member of the Ventura Municipal Art Acquisition Committee 2001-2002 and served as an advisory board member for Studio Channel Island Art Center as well as for the Ventura Foundation for the Arts. Currently she is a member of the Fine Arts Committee of the Museum of Ventura County. She curated many exhibitions including the Contemporary Asian American Art Exhibition at SCIAC in 2003.

Yoshimoto was one of the founders of Studio 83, an artists’ co-op group which was in operation for 16 years and for the Ventura College Friends of the Arts, a non-profit art scholarship fund-raising organization. Please contact hirokoyoshimoto@sbcglobal.net and her web site hirokoyoshimoto.com for further information.

She is represented by Gallery Rin of Tokyo, Bryant Street Gallery of Palo Alto, Velvenoir of Salzburg, Austria, and Artwork Network of Denver.