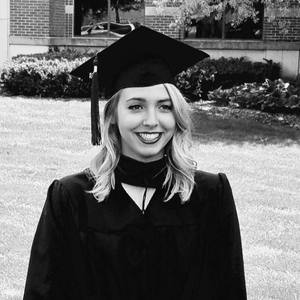 I am a recent BFA graduate from Clarke University in Dubuque, Iowa. My focus is in sculpture and ceramics, though I am also skilled in 2-D work as well as graphic design.

I am conceptually drawn to social issues and political matters that have a direct impact on society or the world as a whole. My recent BFA show focuses on the gruesome reality of the mass-production of meat and concentrated animal feedlot operations. I believe art has a unique purpose and is an essential part of living.

Works created during my undergraduate studies at Clarke University. Most of my work takes a satirical, animated viewpoint of topics we face in America's society today.

My sculpture Unwanted is a representation of the mass production of poultry within the food industry. More specifically, the extermination of freshly hatched male chicks. The process of execution is called chick culling. It is a method that is used within the United States food industry and other major corporations around the world. This involves several unethical methods to termination including - suffocation, cervical dislocation, gassing, electrocution, and maceration through a grinder. Obviously these procedures are cruel and inhumane, but it is also quick and cost effective, which is more beneficial to America’s needs. Meanwhile, the female chicks are kept and grown to produce eggs and provide meat. Through scientific engineering, the chickens mature faster and grow plumper, damaging the chicken’s health and limiting their mobility.
One of the reasons why we eat animals such as cows, pigs, and poultry, is because we consider them unintelligent creatures. However, I believe it is completely possible that these animals have a capacity to learn. Similar to an infant child, seeing and discovering the world for the first time. I chose to transform the baby chick into a hybrid of my own design. Since baby’s face is incredibly expressive when portraying an emotion, this provokes the viewer to feel sympathy for the chick and possibly even want to embrace it. The cast iron skillet adds a level of fear and intimidation for both the viewer, who feels the need to save the chicks, and the chicks that sit within the pan. The eggshells surrounding the skillet resemble the millions of chicks that have fallen victim to the torture and cruelty within our twisted food industry.

DonTRUMPet is a political nightmare come to life. With political campaigns constantly circling the media, and America’s boisterous reactions taking over social media, I couldn’t resist exploiting the most controversial candidate of them all, Donald Trump. DonTRUMPet is loosely based off of Cohen’s fourth monster thesis, The Monster Dwells at the Gates of Difference, in which it gives an example of a master and slave relationship. I want to represent that relationship by giving America the power to control Trump’s mouth for once. Since Trump is continuously making a joke of himself, I decided to embrace that idea by making him into a ventriloquist dummy. I want viewers to laugh when they see Donald Trump as a dummy to get the point across that we shouldn’t take him serious as our President.
Donald Trump’s campaign is racist, sexist, and homophobic, and he will set America back 50 or more years if he’s elected president. Not to mention his autocratic, egotistic, narcissistic, misogynistic personality and thirst for the limelight. His rally is comparable to a Ku Klux Klan meeting and his ideas are closely related to Hitler’s. I incorporated these ideas through the accessories the dummy is wearing. He also has gestures to go along with the idea of a Nazi supremacy. Overall, my goal with this satirical creation is to start a conversation and hopefully convince people not to vote for Trump.

In America today, violence is unfortunately a topic we often see broadcasted on the news, through social media, and various other resources. Almost everyday innocent individuals fall victim to devastating events caused by the thoughtless acts of others. As most Americans can recall the school shooting at Sandy Hook Elementary that immensely impacted the hearts of many across the nation. It is truly heartbreaking to see the weak and innocent targeted in these intentional acts of violence, especially when children are involved. Many stories have surfaced about people hurting children by hiding dangerous objects or harmful poisons in toys, candy, playground equipment, etc. By creating a teddy bear form out of twisted metal, my intention is to express awareness about this rising problem to warn parents and families.
I titled my piece Misery to describe the grief of families who have encountered these vicious attacks, and to acknowledge the horror of how heartless these attacks on children are. A feeling of suspension is created through the use of material. One might ask why a child’s companion would be seen in this type of manor through welded steel. This sculpture also creates tension with its hollow, motionless skeleton and off-putting childhood resemblance. While the sculpture embraces the idea of these attacks on children in an extreme manor, the objective is to make parents double-check what they give to their children and to always have a guard up when purchasing toys or candy from an unreliable resource.

The idea behind this cynical baby goes back to the question of whether we are born good or if being good is something that we learn. When we compare this question to a shark, a born killer, the answer seems simple. Yet kids go through stages of acting out which most people dismiss as going through a phase. During these phases it is very important to discipline a child and teach them right from wrong. However, if children are not corrected for doing wrong, does this affect the how they act as they mature?
The surrealism movement sparked my inspiration for this monster creation. Artists such as Salvador Dali and Rene Magritte are great examples of this movement that helped motivate the concept behind Shark Baby. With this creation I combined two subjects that are complete opposites from each other to form a species never before seen. Because surrealism is known for its dreamlike quality, I decided to challenge this idea by creating something directly out of a nightmare.

In the United States, efficiency is the key to success. Laborious jobs have become simplified with new technological advances and mass production of goods has made a lasting impact on the economy. However, the quality of goods is suffering drastically due to the increase in demands seen across the country. Although mass production has helped in distributing goods faster and increasing sales, where do we draw the line between productivity and ethics?
Mass production is the face of the meat industry and has given wild success to hundreds of food chains including Mcdonalds, Taco Bell, Burger King, and many more. During the process of producing and distributing meats, unprincipled shortcuts have been taken along with unjust treatment of living animals. After carefully researching the meat industry, my goal is to send a message surrounding the cruelty of these animals.
I chose to use cows because of their individual personalities that similarly relate to humans. The purpose of coloring them red is to clearly identify these cows in the beginning preparations for slaughter and exposing the flesh. The variations of color symbolize the disease and deterioration of the cows. They are hung in a conveyor belt fashion to further identify with the final journey of their lives, which is the most excruciating, and inhumane moment.
In contradiction the chandelier represents dining in at a restaurant and the thoughtless action of ordering a plate of food without any question of where the food actually comes from. It is also an example of where we are in the hierarchy of the food chain. The overpowering chandelier trumps the cows that hang below.

In today’s society, the average person works around 40 hours a week or more depending on the line of work. In relationship to work, the average amount of sleep a person gets is close to 7 hours a night. The remaining time between work and sleep varies, but most of us scramble to get housework done, work out, spend time with family, etc. According to the Buddhist practice, we should use any moment of peace to meditate and free ourselves from the stresses we encounter. With that in mind I created a sculpture that would envelop one in thought and solitude.
My concept behind the design of this chair was to be consumed in the chair and create a closer, more intimate relationship with the sculpture itself. When sitting in this chair the dark stain of the wood takes over one’s mind to rid the sitter of his or her troubles and stresses if only for a moment. I used triangles to evoke a more aesthetically pleasing geometric sculpture and give it the look of a modern piece of artwork. I worked with larger scale to invite and entice the audience to sit in the chair. Creating a place of total solitude that even Buddha himself would want to sit in.

The great horned owl is a beautiful and dangerous creature rarely seen but frequently heard. Growing up, there was an owl that lived outside my window and though I never saw it, I enjoyed falling asleep to the hoots it cried out into the darkness. This experience inspired me to create the illusive animal that stayed in the trees outside my window. My idea behind my Wire Owl sculpture was to embody the form and mass of the great horned owl through quality of line. I used wire because of its flexibility, which created the expressive lines I desired. Since the wire is such a lightweight material, I sculpted a subject with a similar weightlessness. The line quality creates motion, which further compels the idea of this carnivorous bird captured in flight, just before it seizes its next victim.

My sculpture, Empty, loosely represents a series of hot air balloons that are slowly deflating. The single form next to the balloons represents the point in which the balloons originate from. The body of this sculpture creates a unified form and overall mass through the repetitive stacking of similar shapes. The sculpture resembles an abstracted idea of existence, but it also provokes many different topics and questions. Looking at the balloons and this process of deflation it is clear that once the remaining air has left each vessel, there will be nothing. Only the empty shells of the previous effervescent bodies. This sculpture captures a brief moment in the transition from life to death. It is a memory frozen in time. Though, we do not see the balloon inflated, we assume that it once was.

As I grow older I constantly find myself reflecting upon different aspects from my childhood that have molded me into the person I am today. An enormous struggle I faced as a child was my shy personality and my intuitiveness to doubt my surroundings. I acknowledge these timid and hesitant qualities in my sculpture through the lamb’s body. The lamb represents innocence and uncertainty, relying on others for protection and constantly aware of its surroundings. Several characteristics of my personality derive from my childhood disposition, associating my childhood as the foundation or “body” of these particular traits.
I have recognized these traits as being anxious, sensitive, and insecure at times. I have related these current personal qualities to the quick-footed nature of a rabbit. While most view this creature as sweet and cuddly, others simply see it as a pest. The rabbit, however, leaves nothing to chance and uses its speed to abandon any imposing situation. Relative to myself, my mind often makes assumptions and jumps to conclusions that are unlikely. As I get older, I become more aware of my rabbit tendencies and I try to convince myself to stop running, but that instinct will always be buried underneath it all.

Series of forty mugs including four different styles. Each hand thrown and glazed.