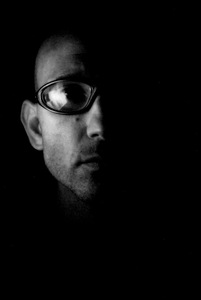 Richard Silvaggio was born in Melbourne (Australia) 15/2/76. He enrolls at the Fine art academy of Carrara and he graduates with highest honors, writing a thesis entitled “Freak show, the ugly and the diabolic in art from middle ages to Contemporary art”, with Omar Galliani as a supervisor.
His artistic path begins following grotesque themes, combining physical objects, installations, to the paintings, (often represented by ugly and awkward characters), in order to gain major completeness to the work’s concept. Later on he decides to put aside the bizarre aspects, to concentrate on a much more delicate and figurative line. The female figure, movement and the body’s elegance become for the artist an important cornerstone. He completely abandons the use of colors for the monochromatic image. The brilliance of his paintings can be found in the skillful and elegant use of the “none color”. In fact, Richard manages to create impressive chiaroscuro effects using exclusively black and white oil colors that transform his figures into sculptural images.
His last works, which he calls “The archetype of nothing”, are hidden identities, fluctuating in an undefined space, unworldly and harmonic female figures, sometimes imposing images as if to demonstrate that it’s the soul that imposes and not the materiality of the body. His artistic language is an original one, nearly provocative towards that part of the contemporary art that often bends itself to market laws: his artistic freedom permanently allows him to take a challenge, facing the present.
Richard gives us his poetic vision of the sub consciousness, in a series of oil paintings, some on wood, and some on canvas. Just like childhood ghost vision archetypes, his works are populated by white cloths suspended in emptiness, capable of astonishing the observer while they float in nothing, or while resting, allowing to see the silhouette of whom it belongs to, without revealing the aspect. Richard Silvaggio keeps intact his taste for the enigma, rekindling with sophisticated intellect and pictorial interpretation. The artist deals with the description of soft grey cloths, from white to the very black, bringing on to “grisailles”, never boring, never expected, supported by a strong spiritual/conceptual base. The main character is that part of the celestial existence identifiable in the human thought, called to fill existential voids, materialized in this case in candid, unsettling apparitions sprung out of the artist’s imagination and out of his talent.
The artist’s aim is to create an intimate dialogue between the painting and the observer; the work must transform itself into a sort of silent oracle that is able to ask questions and to impose answers.

The archetype of nothing

THE ARCHETYPE OF NOTHING.

I felt the need, in the course of time, to identify an essential code: the desire, maybe the urge, to push my work towards a formula of synthesis capable of expressing the drawings of my thoughts in a clean and instant attractiveness. I sacrificed the use of color. I wanted to reduce the variables, to go along the inside conflict of my conscious state on a graphic level. In other words, the operation might unveil ingenuous reflexes, but the tension that pushes the thought to the extreme limit of contradiction is precisely human. We are not able to imagine death: it does not produce images. We are also unable to crystalize the source of our thinking process, the self, therefore the fundament of life. I grasp my being as a transaction between two essential conditions that, however, I cannot see. And it’s between these two extremities, in a recursive ring, that my thinking substance consumes. I am, we are, the grey tone that elapses between black and white. The same grey that gives volume to the draperies I paint, draperies that in turn give volume to an empty figure that reveals in truth the absence during the act of searching and self-questioning. The challenge, in my opinion, is to reach to an esthetic, to an intrinsic beauty of image, that yes, conveys a content, but a content that, as a last extreme paradox, expresses the inexpressible: nothing

“The one or the other”

“No one knows what happened”

“One day all this will be yours”

“The guardian of time”