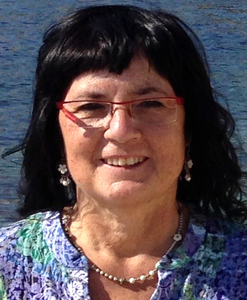 Angela Barbi was born in Girona (Spain) where she lives at present, she also lived in The Netherlands for three years as a child, and has travelled extensively.

From a very young age she started drawing and painting, later on she received tuition in classical drawing and expressionistic painting, following the anthroposophical school of Rudolf Steiner and Beppe Assenza according to the theory of colours by Goethe. She recently visited the Goetheannum University in Basel, Switzerland, and was deeply inspired by the Works of art observed and the training offered. She has also followed training with some Spanish and International painters for many years.

For over 25 years she was an English teacher at a secondary school, combining the painting with her teaching tasks. During those years she acted as the international coordinator of the EWE Project (European Work Experience Exchange) between Spain and Great Britain, an activity that involved groups of Young adults doing for 8 years with Stockport (Manchester).

At present she manages her own business EPC ART COURSES (Enjoy Painting Catalonia) that organizes watercolour painting holidays in Spain and other countries, tutored by several of the best renown watercolor masters in the world.

She has exhibited in several collective and individual exhibitions in Spain, Greece, France, Turkey, Slovenia, Italy, Indonesia and China. She’s the member of a number of art societies and she has been a juror for the IWS International contests (2013, 2014, 2015), IWS Watercolour 2015 contest in UK and others. She’s the founder of IWS Spain in 2014. At present she continues to collaborate with the other IWS delegations worldwide to build strong lasting bonds with other countries through the art of watercolor.

I love to paint in abstracts basically, in different techniques and mediums, from silk paintings with inks, to acrylics and lately more watercolour. My pleasure is more in the expression of what I feel than the representation of reality.

A representation of my city, using collage and watercolour 28 x 32

Pure watercolour to reprresent the essence of waters and rocks, 50 x 70

“I Offer You my Friendship”